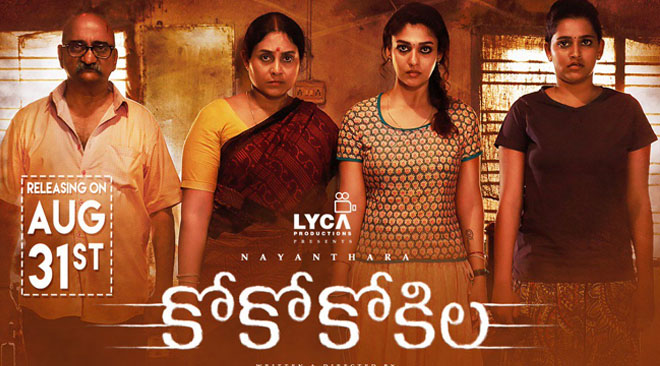 When you’re pushed to the limits and you have to do something to get out of the situation, you think about all possible ways to escape and survive. Similarly, Kokila had to undergo a situation that pushed her to the limit and she survived it despite all the odds going against her. How, you say? Let’s discuss

Kokila (Nayantara) is a timid girl who doesn’t laugh much. Her eyes always show fear and she portrays an innocent look all the time. Her mother (Saranya Ponvannan) is diagnosed with cancer and Kokila is determined to arrange money some how.

She is pushed by many people to do prostitution, but one chance encounter with a drug mafia dealer makes her a peddler. She decides to do it for her mother and never accepts any forcefull requests from any men. One day she decides to step out of the drug business but she is once again pushed into a corner by the gang head. From such situation she tries to escape. Was she successful? If so, how? Watch the movie for answers …

Nayantara as Kokila is top class in this movie. She maintained an innocent face and body language through out the film.  Also, her highly expressive eyes show her fear as Timid Kokila through out the film. Her performance is the backbone of the film and she did give her best to carry the movie on her shoulders.

Saranya Ponvannan with her innocent face once again delivered a killer performance and she is the next impressive person in the cast after Nayantara. Yogi Babu got a killer comedy track and even though his scenes not very new, they are presented with freshness and his timing is really good.

RS Shivaji, Anbuthasan and others added authenticity to the roles they were cast in.

Sivakumar Vijayan gives an authenticity to the visuals. He sets up highly believable environment and experiments there too. He understood the plot and requirements of the story and director, perfect to the tee.

Nirmal’s editing is a key point of success for thr movie. He maintained good pace and cool rhythm through out the film. There are not many waste shots or abrupt editing jerks just for the sake of it.

Anirudh Ravichandran’s music is a high plus for the film. He never overdid or under scored for any scene. After a debacle like Agnyathavasi, he came back really well.

Nelson Dilipkumar, the writer and director of the film, never tried to caricaturise his characters and maintained a good tempo in the screenplay. For every clever move Kokila takes, he reasoned well. Keeping the main character so innocent yet clever is smartly done by him.

Story could feel a bit outlandish

When we see a low budget film, we expect the team to come up with something fresh and interesting rather than the run-of-the mill kind of films executed with different cast in low budget. Nelson dared to question stereotypes and looked for humour in places where normally many don’t. He successfully kept the proceedings interesting throughout and delivered huge laugh out loud moments. A must watch for popcorn moviegoers over the weekend.