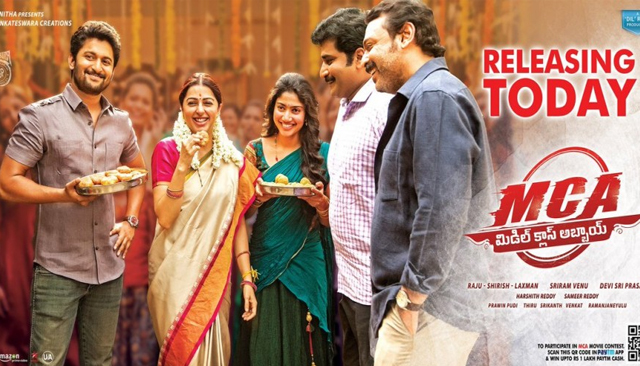 Nani established himself firmly as Natural Star with continuous successes after a lean period from Yevade Subramanyam. Now, he came with MCA for 8th hit in a row. Could he do that? Could he make a good movie again?

Well, we have to tell you one thing here, not many heroes in Telugu Cinema did have such a long run of successes and at times, the decisions could go wrong. Rather than talking about box office strength and stamina of this movie, we will try to tell you how we felt after watching the movie.

Nani (Nani) is close with his brother (Rajeev Kanakala) and they both are almost inseparable. Their uncle (Naresh) and aunt (Amani) take care of them as their family. Rajeev gets a job in Hyderabad and both the brothers spend happy bachelor life. Rajeev gets married to Jyothi (Bhumika Chawla) and she sends Nani to his uncle’s home.

He thinks off her as a villain in their happy life. She gets a transfer to Warangal and Rajeev has to go to Delhi for his job training. Nani unable to say no, goes to Warangal with Jyothi and there he meets Pallavi (Sai Pallavi). They both fall in love but Jyothi again interferes in their happy-go-lucky relationship.  Nani decides to move back with his uncle but realises how Jyothi feels responsible towards him. When he tries to meet her, she will be in a conversation with a goon, Shiva (Vijay Verma) and Nani acts on impulse. What happened there? Why did he react and how that affected their life? Watch the movie to know answers…

Nani is getting routine in his performances with each film. In this film, he doesn’t even try to innovate or try a different expression other than what we have seen already. The stories he is selecting are also highly routine and this time the making also is very poor. He tried hard to keep the proceedings engaging but he needed help from story and screenplay too. Sadly, he left wondering and wandering like in the film’s climax.

Sai Pallavi is definitely a good actress but she can’t pull off a simple comercial heroine troops that just require you to appear in songs and romance hero. She is way beyond that and we can see that she is trying hard to fit in. Even though she puts up a spirited show she needs to concentrate on taking up meatier roles than this kind of regular ones.

Bhoomika Chawla returned back to Telugu Cinema after a gap but she seems to be still stuck in Khushi and Simhadri days as her expressions and acting skills are still locked at that time. She doesn’t really has an appeal to look like a government official or a Sister-in-law to Nani. It could have been better to cast someone else in this role than her.

Naresh, Rajeev Kanakala are wasted in spineless roles. Vijay Verma, a good actor who did memorable roles in Films like Pink is utterly misused in this movie with an unidimensional character. Rest all are there to  fill the screen.

Sameer Reddy gives the movie a good visual tone. He doesn’t try too much with lighting or framing but delivers a neat depth to few frames that we register immediately. Other than few frames, the consistency in his work is absent. At times, he delivers some brilliant ideas and others he just lazily finishes the required work.

Music composed by Devi Sri Prasad is highly dissatisfying. He just gives some routine tunes to the film and even in Back Ground score he follows a template and doesn’t try anything more than that. May be he needs to re-focus on the number of films he is doing at a time to keep up the quality. This is definitely not the kind of work people expect from him.

Praveen Pudi tries some concepts in editing but he misses the whole point of the scenes at times. Unnecessary effects and dragged presentation kills the impact of few scenes, even though they are routine. Overall, his edit could have improved the movie but it further dilutes and if it is director’s choice, he should have tried to avoid that for the betterment of the overall film.

Writer and director, Venu Sriram tried hard to sell an age old family drama that is routine in our daily serials as a film. In 80’s and 90’s, these films and stories were a bit new and relevant to the society with ladies routing for the characters. In today’s world, after so many films using the same plots and subplots, you can’t lazily execute a clever plan or expect that just by showing some relationship you can make audience feel for the characters because you have likeable cast. You have to define them characters and also, keep audience guessing at the same time.

As writers, Venu Sriram and his team tried to take a plot that doesn’t really feel new and set in even more old setting in the name of Middle Class life. The shots or scenes might have been updated, the conversations might have been minimalised but what difference does this writing has to writing of someone like Visu. The difference is that they have done it already and when you attempting the same you can’t keep it the same. If audience start out guessing you right from the first scene then their attention span will be very less in a known world. It would have been a better film had they took care in execution and also tried to bring in some new twists than predictable and pale old ones.

Unnecessary drag in the second hour.

For any hero, it is difficult to deliver every time but audience, including critics and reviewers, should not feel that they are been taken for granted. If few comedy scenes and likeable cast are enough to pull off any kind of a story that worked previously then most of the films should be huge hits. But this is just too routine and the team gives a feeling that they have taken things for granted than really trying to engage people.

May be on paper there was a good fun film but that did not translate on the screen as it should have. After an decent first hour the proceedings go down south rapidly with second hour taking the film into an abyss of darkness. On the whole, Nani doesn’t impress this time.