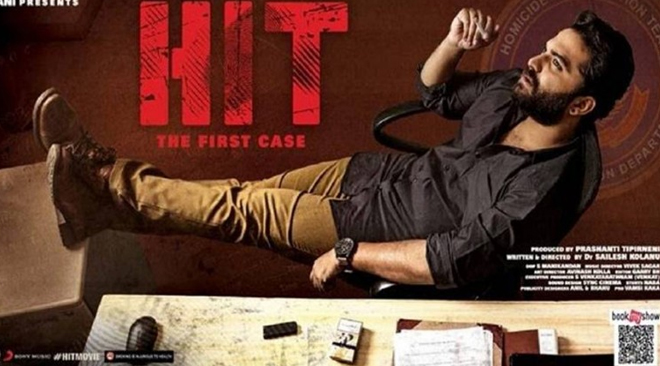 Cast: Vishwak Sen, Ruhani Sharma, Bhanuchander, Murali Sharma, Hariteja, Sahithi
Crew:
Music by Vivek Sagar
Edited by Gary Bh
Cinematography by S Manikandan
Directed by Sailesh Kolanu
Produced by Tripiruneni Prashanthi, Venkataramana, Nani
CBFC: U/A
Runtime: 130 minutes
Viswak Sen found good amount of popularity due to his aggressive nature and Falaknuma Das teaser. The actor did a procedural drama, HIT as his next with Nani as the producer. How is the film? What did he attempt in this one? Let’s discuss …
A homicide department officer, Vikram (Vishwak Sen) is assigned the case of a missing person, Preeti (Sahithi). He suspects everyone from her friends to relatives and neighbours. At the same time, he thinks this could be a chain of kidnaps as his Girl Friend, Forensic Expert, Neha (Ruhani Sharma). Vikram takes a friend from the department, Rohit as his confidant in these cases. What happened to Preeti and Neha? Watch the movie to know full details.
Vishwak Sen is improving but his range seems a bit limited when he tries to underplay. He is more at ease with exploding in a scene or showing an hyperactive body language. He needs to work on that aspect when playing these characters. Ruhani Sharma is beautiful. All others did as per the requirements of script. But no one stand out.
Gary Bh seems to have taken the onus on himself to keep the thriller crisp, here. His cut seems to have saved some scenes that could have stayed a bit too long for audiences liking. Cinematography by Manikandan is very good in framing and detailing but in setting a mood, he could have done better. Vivek Sagar’s score is good but he overpowered some scenes and that let to audiences think there is even bigger reveal waiting for them. May be he could have less intensified the score as per the requirements of the script.
The basics of crime thrillers are followed by book by the director, Sailesh Kallanu, yet he tries to subvert the clichés and look to engage you. While the set up engages you mostly, it doesn’t hold enough key emotion to let you carry with the characters. Basically, Vikram is a one-note character that we don’t normally connect with or try to know more about him. Giving him a past is not enough but the director should have given him characteristis that differentiate him from his past. At least a hint that he changed from what he used to be, would have made him more interesting, as the makers looking to launch a franchise.
While there are such mistakes that they could have avoided they executed the procedural drama more accurately. Would have wished them to not go for more dialogue but they tried to keep it simple and colloquial, thinking people might not understand. As Trivikram said in one of his famous speeches, if we don’t use those words or such lingo, no one will try to understand it or get curious about what just happened. The director cleverly concentrated on what he knows the best and let the others be under-explored for most aspects to give himself another chance at it. As such kind of true procedural dramas are rare, this one does deserve a one-time watch at theatres. If you wish to pass the time, you can catch it at any theatre but there is no need to rush!
Rating: 2.5/5