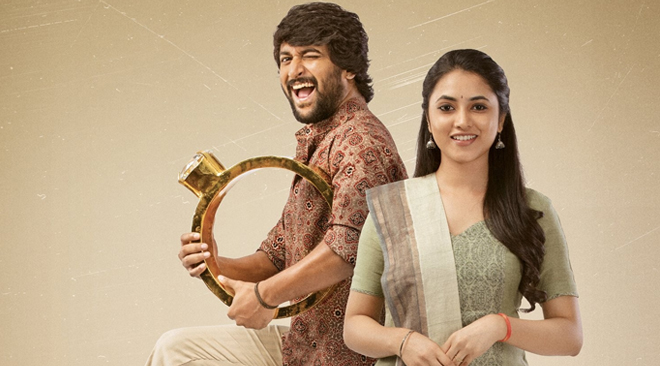 Cast: Nani, Vennela Kishore, Lakshmi, Kartikeya Gummakonda, Anish Kuruvilla, Priyanka Arulmohan, Saranya Ponvannan, Priyadarshi, and Satya
Crew:
Writing by Mukund Panday, Darling Swamy
Music by Anirudh Ravichander
Cinematography by Miroslaw Brozek
Editing by Navin Nooli
Directed by Vikram K Kumar
Produced by  Mythri Movie Makers
Vikram Kumar films after Manam have been depleting in quality of writing but his making was always great. This time even the making quality has gone down by ten notches. With Nani and Lakshmi, Saranya Ponvannan kind of actors, he couldn’t really hold the interest of the audiences. The major problem for this over-long tale is clichés. Never this script try to go beyond the basic revenge film format and we yearn for the innovativeness that Vikram showed in Ishq, 13B which were not his high concept films.
Like in 24, Hello he took the main idea and then fell in love with it so much that he forget to give his own touch. The film drags on and on after you understand the only twist, the movie has to offer. Vikram Kumar somehow lost his touch in writing a scene and constructing a scene properly. He still gives his unique touch to the routine scenes and that is not enough in this movie.
It is a sloppy movie that fails to get going from the first scene. The robbery starts off promisingly but then the next scenes stop making any sense at all. Even if he leave all the logics aside and watch for entertainment purpose only, movie struggles to maintain the pace. It keeps going as if we are watching an old movie CD in our home theatre than a new movie at a theatre.
Performances wise  Lakshmi, Saranya Ponvannan take the first two places. Nani holds his ground very well in front of them and he even keeps the movie, intact. Karthikeya Gummakonda did try his best to look the part but his character does no good for him. Priyanka Arulmohan is beautiful and expressive.
Writing wise, the film doesn’t try to explore the fun angle at any stage. Even the scenes that could have been highly interesting fail to engage us. Dialogues seem too old and patchy at best. Vikram’s golden touch in presenting a romance is also not seen in the film. The fights just look generic and entire film looks like a TV movie script extended to a film screen with some silly execution.
On the whole, movie tries to deliver a magic tale on revenge with a struggling writer getting it all right with his real life story of revenge. Movie fails to engage you after a point of time and this film could have been much better if Vikram was in form but he seems to have restricted himself to make a commercially viable film at any cost. You can watch it if you like Nani and watch every movie of his. Otherwise, you can look for another release this weekend to watch at theatres.
Rating: 2/5