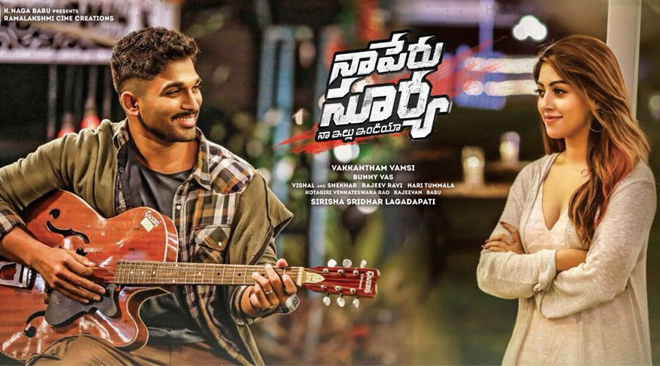 We all like to live our lives that way we desire it to be. We don’t want any kind of obstacles or disturbances of any sort in our path. If such a thing arises we tend to think we lost everything and end up losing ourselves. But is it necessary? Do you we need to react to situations or should we determine our path and stick to it? Life questions that we need to address at every moment.

Allu Arjun is back with Naa Peru India Naa Illu India movie this Summer season. He made it a point that he delivers one film for every Summer and family audiences have been embracing his films. Will they do the same for this one too??

Surya (Allu Arjun) cannot control his anger at all. If he feels there is a need to correct something, he does it without thinking about the consequences. He becomes a point of irritation and embarrassment to his Army Regiment and  Colonel (Boman Irani). One day, he kills a terrorist without any orders. This makes Colonel take an evasive action on him.

But when his God Father (Rao Ramesh) tries to convince Colonel, he gives him a last chance to go and get the signature of psychologist Ramakrishna Raju (Arjun), who happens to be his father, to reinstate him. Here there is a catch, his father and he fell out due to his anger and he walked out of home, 12 years ago. How will he convince him that he can control his anger? Does he needs to change at all? Watch the movie for answers …

Bunny aka Allu Arjun has improved so much that he is now, an accomplished actor who can be trusted with your scene. He has his own way off delivering the goods and a way to connect as well. Here, there were chances to overact but he managed to not go overboard and balanced it very well. It is his performance that holds the film.

Anu Emmanuel, had to serve the glamour quotient and she did so. Arjun Sarja, gave a leveled performance. He is very good in few scenes but his character is not well defined. In fact, no character in this movie is defined well enough.

Cinematography by  Rajeev Ravi is eye pleasing. He used some camera angles and lighting concepts to highlight the scene and they worked well enough. Still some shots does feel like  rushed up.

Music by Vishal Shekar doesn’t have enough vigour to make us dance in the theatres or even hear them on repeats. Back Ground Score is good in parts.

Editing by Kotagiri Venkateswara Rao is not good at all. The fade to black transistions and choice of shots is not upto the standards of a man of his caliber and experience.

Writer and director, Vakkantham Vamsi, did have a point in his story. He wanted to say that circumstances shouldn’t determine our character so that we can reach the goal, we set out to achieve and also, he wanted to give a social message imbibed within asking people to not be too selfish that they don’t understand what mistakes they are committing and influencing lives of innocent people.

While his story has some quality, his narration is poor. Even when we look at it as a completely commercially said film, there are no enough character moments that we feel, this is the character of Surya. There was an attempt to determine but as there are too many contradictions within the character definition, we don’t really connect to it. Also, trying to mix patriotism into a character driven film, backfired.

Unnecessary drag in the screenplay

When we talk about good patriotic films in Telugu, we remember films like Sardar Paparayudu, Bobbili Puli, Major Chandrakanth, Khadgam that have characters that are well defined and connect us to the main plot as well. But when we look at Naa Peru Surya Naa Illu India, we don’t feel the character’s journey or connect to it completely.

A basic necessity of any writer is to define a character and stick to it. Vamsi starts with Rakshakudu, tries to cater to comedy loving audiences by going to Race Gurram and then slips into Temper in a Legend, Simha style of screenplay. Vamsi cooks up a completely predictable masala dish that doesn’t really convince the audience. It is difficult to sit through it one time in the theatre.