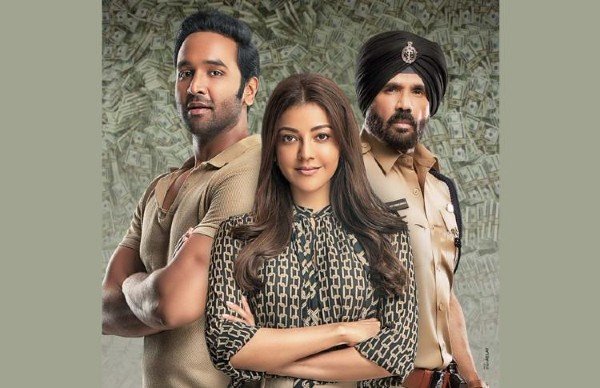 Mosagallu is a 2021 Indian film based on the true events of a large-scale technical support scam. Shot in both Telugu and English the film is directed by Jeffrey Gee Chin and produced by Vishnu Manchu under the banner of AVA Entertainment and 24 Frames Factory. The film was made on a grand scale. The unit pinned big hopes on the success of this film. Check out the review here.

Story:
Arjun (Vishnu) and Anu (Kajal Aggarwal) are brother and sisters. They have multiple bad experiences while growing up. They get cheated by many. Arjun works at a call center, where he gets the contacts of different people staying in the USA. With the help of his boss, Arjun decide to pull out a scam related to tax payment from people living in the USA. What is scam all about? Did they get caught? What happens in the end? Forms the story.

Performances:
Manchu Vishnu is definitely the biggest plus point of this film. The entire movie revolves around his character and he became one of the major driving factors behind keeping the audience engaged throughout the film. Though Kajal didn’t have much scope for performance, she carried herself with ease. Her screen presence is quite good. Suniel Shetty is one of the finest actors and he has proved the same with his performance in this movie as well. Ruhi Singh acted naturally in the movie and she is truly an asset for this movie. Navdeep delivered an honest performance in the film. Naveen Chandra is superb. The rest of the actors like Mahima Makhwana, Nagineedu, Raghu Babu, Raja Ravindra, etc also made their presence felt.

Technical Aspects:
Director Jeffrey Gee Chin came up with a high-octane action drama with this film. The director has succeeded in engaging the audience with his story and narration. He tried his best to give a refreshing vibe to the story. Production values by Vishnu Manchu under 24 Frames Factory are very high. The music by Sam CS is too good. Though the songs haven’t made any impact on the audience, his BGM is definitely one of the biggest plus points of the film. Cinematographer Sheldon Chau has produced some sleek visuals for the film. Editing by Goutham Raju is neat.

Verdict:
Manchu Vishnu must be appreciated for choosing such a thrilling script to make a perfect comeback. They have adapted the real incident very well. Right from the go, the audiences get involved in the proceedings and excite about the interesting plot-twists. Vishnu and Kajal remain the main pillars of the film and delivered commendable performances. The rest of the actors also did pretty well. The screenplay is racy and keeps the viewers hooked to their seats. The background score of Sam CS is a huge advantage for the film. The rich production values made the film look great on screen. On the whole, Mosagallu is an intriguing cybercrime thriller that can entertain audiences for sure.