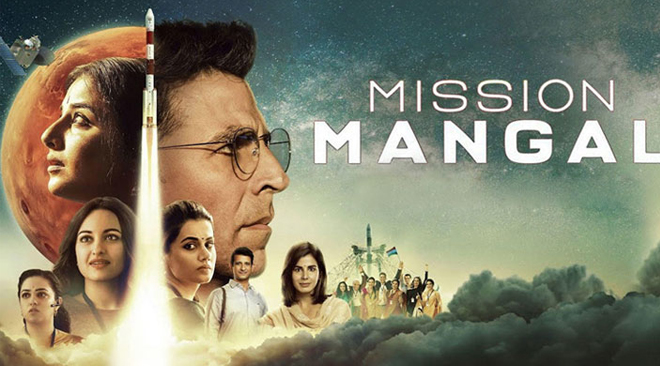 Cast: Akshay Kumar, Vidya Balan, Sonakshi Sinha, Tapsee Pannu, Sharman Joshi, Kriti Kulhari, Nitya Menen
Crew:
Story by Jagan Shakthi
Written by R. Balki, Nidhi Singh Dharma, Saketh Kondiparti, Jagan Sakthi
Music by Amit Trivedi, Tanishk Bagchi
Edited by Chandan Arora
Cinematography by Ravi Varman
Directed by Jagan Shakthi
Produced by Cape of Good Films, Hope Productions, Aruna Bhatia, Anil Naidu, Fox Star Studios
R. Balki can see comedy in any situation and he likes to tell his story with comedy. He has been doing the same for all his movies. Seems like he passed it on in this science mission script ptoo. His influence in bringing humour everywhere and creating some unresolved threads for characters can be seen in this film. Mostly, Jagan Shakthi did not seem like he understood the gravity of the success that India achieved.
Reducing the complicated scientific terms and research to home science, developing complicated material out of waste, did not seem like an ideal way forward for the film that is trying to give an ode to Mars Orbiter Mission from India. The humour overdoses doesn’t let us concentrate on the mission.
It is like Balki, Jagan Shakthi and two other writers wanted the film to be about domestic issues of the people working on the mission than the mission itself. 80% of the film is all about how a husband is happy that his wife chooses to retire, how a completely superstitious person is ridiculed, how a person who shows instability is given the Mission Head role and he doesn’t end up being a joker, how sarcasm can ridicule good scenes and important scientists.
Movie doesn’t try to show how a complicated mission was achieved by young scientists and dedicated ISRO employees over 24 to 35 months to make it a success. It just tries to talk about someone in the higher authorities opposing the mission for 1 hour of the film and it goes over the excellence of scientists in just three to four montages.
If people don’t understand why going to Mars for India with made in India parts is important as a Nation and how complicated it is to achieve, no one will be interested in their personal lives and relationships. The ensemble was highly talented actors and the director should have been able to use them well too. But he just kept giving inconsequential parts more importance and disinteresting characters more screen time.
VFX is very mddiocre and Ravi Varman’s photography is a bit patchy for his standards. Performances by Vidya Balan, Akshay Kumar, Sharman Joshi are good and others are regular. None of them were given much scope to come up with a performance even in one scene as well. Trying to tell a human drama behind a scientific mission didn’t click due to more self-ridiculing and lethargic script writing.
Rating: 2/5