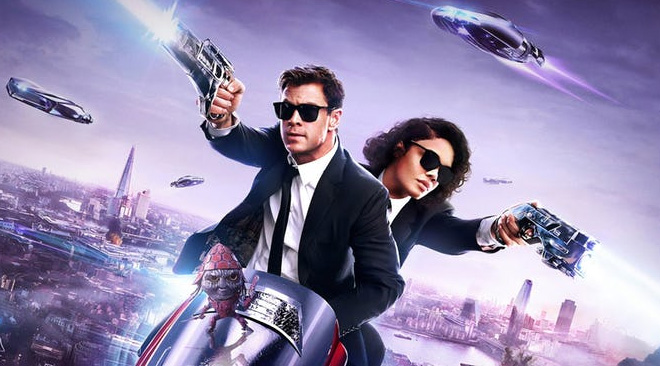 Cast: Tessa Thompson, Chris Hemsworth, Liam Neeson, Kumail Nanjiani, Emma Thompson
Crew:
Written by Art Marcum, Matt Holloway
Music by Danny Elfman, Chris Bacon
Edited by Christian Wagner
Cinematography by Stuart Dryburgh
Directed by F. Gary Gray
Produced by Sony Pictures
Basics of filmmaking is that a script should be guided by concept and idea than commerce. Once you complete your first draft exploring the concept and ideas, we can think about commerce. Men In Black was always about commerce than concept. A satirical take on James Bond universe with Buddy Comedy elements don’t really come under a heavy concept story. But if you can stretch that wafer thin idea into a script beyond jokes and buddy comedy, we can have elements that lead to a different level of fun than just similar jokes being played again and again.
MIB International rather than understanding this simple basic flaw of MIB franchise tries to just repeat what worked in the first film with a man-woman duo. The thinking behind this seems to be that the premise of a man-woman buddy comedy and the unexplored dynamic from Thor Ragnarok film will give MIB, a better commercial result and new lease of life to the franchise.
Actually, Thor Ragnarok is a buddy comedy mixed with character moments that introduce new people. It is not about reviving same jokes with different faces. It is more about taking franchise forward than just explore the same in different way. MIB when it came out looked unique as it included a black guy and white guy buddy comedy dynamic in world where every possible advancement is an alien doing manual work for humans.
The jokes repeat themselves in MIB2 and MIB3 but with different challenges. As the duo found acceptability, movies could make some sound commercially at the box office. They have damaged the first best impression so deeply that we can see people not remembering the movies with glee. Now, bringing new comic actors with charisma doesn’t make the old jokes funny again.
The premise needed to be altered to fit in the new ones and the franchise needed to take black comedy in a different direction. Rather it tries to make commerce work  with less creativity. Movie making and content creation will always be creative ideas that have commerciality than just commerce trying to find a creative excuse to work. Chris Hemsworth, Tessa Thompson and Liam Nesson are criminally misused and the movie is a big boredom as after 15 minutes it goes nowhere. Avoid this one and if you’re a fan catch it later on any other mediun than theaters.
Rating: 0.5/5