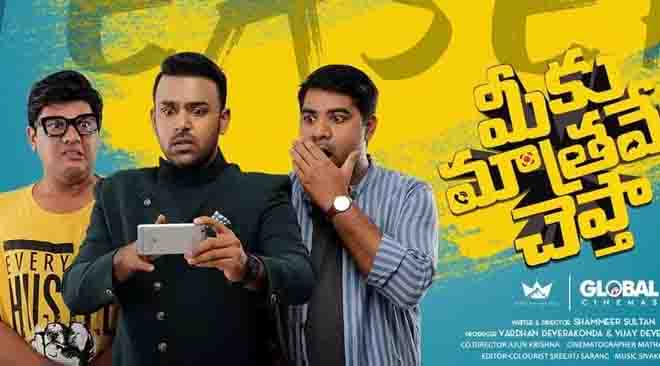 Cast: Tharun Bhascker, Abhinav Gomatham, Vani Bhojan, Pavani Gangireddy, Avantika Mishra, Anasuya Bharadwaj
Crew::
Cinematography by Mathan Gunadeva
Music Composed by Shiva Kumar
Film Editing by Srijeeth Sarang
Directed by Shammeer Sultan
Produced by Vijay Devarakonda, Vardhan Devarakonda
Production House: King of Hills
Runtime: 120:26 Minutes
CBFC by U/A
Vijay Devarakonda decided to become a producer with Meeku Mathrame Cheptha introducing his director Tharun Bhascker as a lead along with Abhinav Gomatham as supporting lead. Movie gained buzz over the past few days with Vijay Devarakonda promoting the film all over the place. We normally see directors rating an actor and suggesting what went wrong or right when they perform. Let’s see what Tharun has to offer as a lead in this new-age comedy.
According to story, Rakesh (Tharun) falls in love with Stephie (Vani Bhojan) and Kamesh (Abhinav Gomatham) falls for Jacqueline (Pavani Gangireddy) who are working as doctors. Rakesh and Kamesh work for a TV Channel, LTV. Rakesh is a VJ and he has a tendency to over think and get nervous when handling a stressful situation. He also has a tendency to lie and that catches him in a tricky situation with his fiance before marriage. He runs all over the town so that she doesn’t know about the video and he meets old friend like Paapa and his strict sister (Anasuya) in the process. What is the video? Can Rakesh escape from this situation without losing everything? Is it actually his story? Watch the movie for answers …
Tharun Bhascker should stick to supporting roles and direction, here-after. He tried too hard to convince and over delivered dialogues. His modulation killed many lines and his extreme stammering did not come across has him being nervous at all. Abhinav also tried to hard to convince and his antics did not suit his character. All others including Anasuya looked like they came for a parade of slow-mo shots and try too much in front of camera in the name of comedy.
The major culprit of this film is Shammer Sultan. He underwrote many scenes and asked actors to over involve. Other technical team tried to give their best to execute visuals better. Cinematography by Mathan Gunadeva and edit by Srijeeth Sarang are good enough. But music by Shiva Kumar is an incompetent as the script and direction. BGM adds to the irritation that the scenes exude.
Shammer Sultan as a writer and director tried to bring his short film experience to the large screen in the same way. A very very tiny short film script cannot be dragged for 2 hours but the director seemed to have taken it as a challenge. Unfortunately, for him the concept he took had no teeth or depth to sustain for the runtime. On top of it, his one liners and over dependency on dialogue comedy in slapstick format, movie tends to look over long and tests our patience like we have bought a one way ticket to hellish torture plane ride.
Without any gravitas in the situation, comedy doesn’t work at all. We don’t feel the urgency that we felt in Panchatantiram for the comedy to feel organic and highly appreciable. This is a classic case of a team thinking that what works in one format works everywhere else too. Writing should have been at least imaginative and the execution makes it look like a short film released on large screen with 2 hours of torturous content.
Rating: 1.5/5