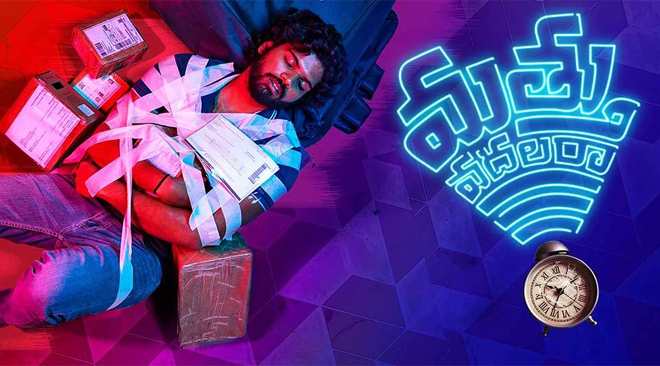 Cast: Sri Simha, Naresh Agastya, Satya, Atulya Chandra, Vidyulleka Raman, Vennela Kishore, Pavala Syamala
Crew:
Cinematography by Suresh Sarangam
Edited by Karthika Srinivas
Music by Kaala Bhairava
Written & Directed by Ritesh Rana
Produced by Chiranjeevi, Hemalatha
Presented by Mythri Movie Makers
CBFC: U/A
Runtime: 131 minutes
SS Rajamouli, MM Keeravani have been encouraging their sons to take up the various fields in Film Industry, so that their next generation will continue in films like them, after their fathers. They achieved so much that they could become a deposit for their fathers to explore their many ideas in films and then comeback to work for them. Now, they are becoming a deposit to their sons, using which they can build a career. Keeravani’s sons Sri Simha and Kaala Bhairava are entering into film field as actor and composer with Mathu Vadalara after SS Rajamouli’s son, SS Karthikeya made an entry into films as executive producer last year. This movie released on 25th December and lets discuss how, it is …
Story follows Babu (Sri Simha), who over sleeps and is highly irritated with his life. He is a delivery executive but looks like a rowdy. His friend Yesu (Satya), is a suck-up to his boss and also to costumers. He asks Babu to change like him but then, he shows him a route to dupe the customers, who are unwary and gullible. Babu doesn’t like it at first but then decides to try his friend’s way.
He gets caught on his first try as an old woman (Pavala Syamala) doesn’t easily believe him. As he tries to escape from the situation, he pushes the old woman and she lands on the floor. Thinking that he killed her, he tries to call his friends Yesu and Abhi (Naresh). But he ends up in a drug deal that involves Myrah (Atulya), Ravi (Vennela Kishore) and a police constable (Brahmaji). How? Watch the movie on screen …
Performances of Sri Simha and Atulya Chandra are not upto director’s vision. They either tried to over act or not act at all. All others, especially, Satya and Vennela Kishore are good. Naresh doesn’t leave an impact. Music by Kaala Bhairava is good but doesn’t match the film. Cinematography and Editing are good.
Writing from the director, Ritesh Rana seems to be a borrowed and inspired stuff from many Korean, Norwegian, Japanese weird comedies. He tries hard to sell his convoluted plot. First of all, why would a person try to go back to the crime scene, when he can escape by hitting his trusting friends, same like others? We don’t get any compelling answers other than the obvious reason that we need to get the plot. Why does a young lady’s parents suspect her activities? Why doesn’t an apartment watchman is seriously and thoroughly examined? We don’t get any answers, even though their behavior looks a case to suspect.
In a flat, without exhaust fans or any way to dumb the waste, few people grow weed and how they are doing it? We don’t get proper set-up except that something like that has really happened. If one needs answers from Ritesh Rana, he might explain that these things do happen, but he looses his grip as soon as he starts walking into the territory of things happening for the sake of twist. As soon as he enters this territory, the narrative looks too mishmash and randomly characters start behaving in different ways. A proper set-up and more well defined characters would have engaged audiences and convinced them about the proceedings. But this just keeps piling up and they tries to deliver an unconvincing twist, for which writers give throw away answers in dialogues. If you’re into black and weird comedy, you may give it a try but this is not everyone’s cup of tea.
Rating 2/5