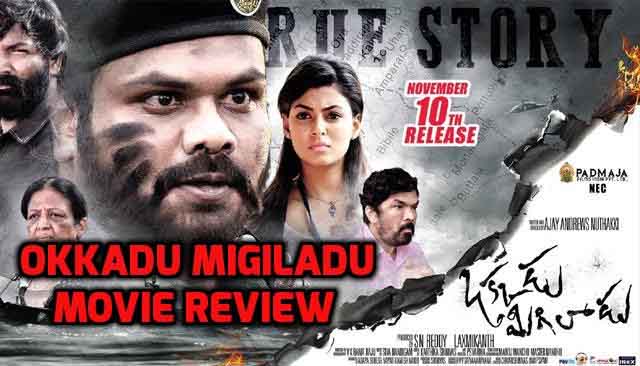 When everyone tries to run away from their living place to some other area or country, where will every person in the world end up? Ever wondered how it feels like being a refugee in your own country? Can you understand how tough it is to maintain a life when you have to run all the time? Okkadu Migiladu tries to talk about this important message but …

A student leader Surya (Manchu Manoj) is arrested as he intends to fight for the justice for an atrocious crime committed on three young women. People around him like reporter (Anisha Ambrose) try to understand what drives him so much to stand for truth and where he gets his fighting spirit?

He narrates the tale of him and his mentor Victor(Ajay Andrews Nutakki). Why he considers Victor a mentor? What happened between Peter (Manchu Manoj) and Victor that shapes Surya? Watch movie to find out more…

Manchu Manoj overacts in each and every scene. He is a good actor when controlled but he just goes overboard and his performance as Prabhakaran, is completely laughable. He caricatures him and also, the effects used to highlight him and his character are highly amateurish.

Ajay Nutakki acts as Victor in the movie. He doesn’t have an expressive face and on top of it he doesn’t even emote right for the character. Anisha Ambrose and Sushasini doesn’t get good characters to go with. Rest all are just there to fill up the extra and supportive characters.

VK Ramaraju, the cinematographer of the movie needs a lot of work in how to make an engaging composition. The director Ajay Nutakki seems to be too confused and even Ramaraju adds his own immaturity to it.

Karthika Srinivas’s editing is too amateurish for a heavy story like this. There is not even one scene where we feel the right emotion. While director is greatly at fault even the editor has his hand this crime.

Shiva Nandigam gives music and back ground score for this movie. There is a place and time where the background score needs to be loud and where silences speak volumes. This young composer misses the mark here.

Ajay Nutakki decided to tell his Ravana Desam, a major bomb commercially and critically in Tamil once again as Okkadu Migiladu. He might have thought as no one watched the movie he can pass it off a new one by designing a character for Manchu Manoj. Even though the plight of refugees and their difficulties in trying to cross over to  another country is real, he doesn’t really make any sense with the conclusive way he narrates.

He doesn’t really understand the nuances of drama and tries to make everyone overreact to everything in the name of emotion. An emotional scene doesn’t mean two slow motion track shots and one person shouting for camera. Even though he might claim that he tried to go for Point of View shots in few sequences they just don’t add value to the proceedings.  He needed to keep the ground reality in tact in such films rather he goes for eccentricity and that’s the major flaw with this movie.

Some scenes of Manchu Manoj

Over action of Manchu Manoj

Too heavy dependence on artificial VFX.

The plight of refugees and a positive message of fight and don’t run, is good. But the movie doesn’t convince one with right emotion. It is highly painfully to sit through few scenes that never end and even the performances doesn’t add any value to the film. You can forget this movie and watch a self-made Sri Lankan war documentary instead to know more about refugees.