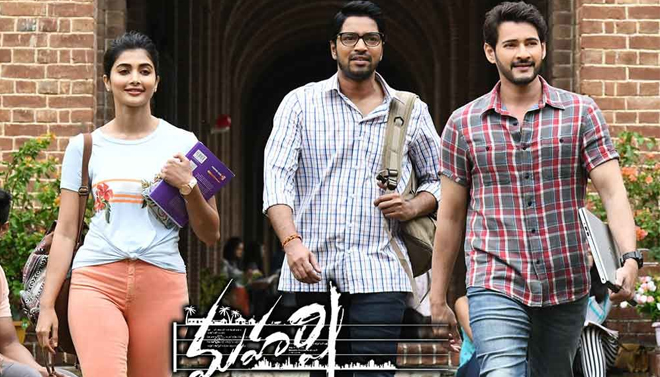 Star Cast: Mahesh Babu, Allari Naresh, Pooja Hegde, Jagapathi Babu, Prakash Raj, and Meenakshi Dixit
Written by Vamsi Paidipally, Hari, and Ahishor Solomon
Cinematography by KU Mohanan
Music Composed by Devi Sriprasad
Edited by Praveen K L
Directed by Vamshi Paidipally
Mahesh Babu decided to come up with his landmark film, the 25th, Maharshi on 9th May in the direction of Vamshi Paidipally. Movie got a good buzz before the release after the pre-release event. But the music of the film by Devi Sri Prasad seemed to be bummer from the start. So, how is the movie? How did the team and actor perform? Let’s discuss …
Plot::
K. Rishi Kumar ( Mahesh Babu) looks at his father K. Suryanarayana (Prakash Raj) as a loser and that makes him run towards success leaving everyone behind. He doesn’t have a good relation with his father, mother and even his friends. Still, they all believe in him.
During his post graduation he meets Pooja (Pooja Hegde) who thinks he is her life and Ravi (Allari Naresh), who gets inspired by him. He leaves them also behind as his goal seems to be too big. But Ravi sacrifices something big for Rishi. What is it? After knowing about it, how will Rishi react and what makes him Maharshi? Watch the movie to know answers for these questions …
Performances::
Mahesh Babu as an actor seems to have limited himself to certain expressions and a rigid body language. The ease he showed in his previous films is missing and we have to wait for him to act in a film directed by Trivikram or Rajamouli, to really open him up. He tried his best to look different and act different in the college episode but rest of it seems regular from him.
A person’s characteristic and energy don’t completely change when they grow older and that should have been accounted by the actor and writers while making this movie.
Allari Naresh is really wasted in this movie. His character could have made career of any upcoming actor but for Naresh, it changes nothing. Pooja Hegde is given a glorified cameo in the film.
All others including Kamal Kamaraju,  Rao Ramesh, Mukesh Rishi, Meenaxi Dixit, Prithvi, Prakash Raj, Jayasudha, Vennela Kishore, Nasser, Jagapathi Babu, Sai Kumar, Tanikella Bharani, Annapurnamma, Kaikala Satyanarayana, Kota Srinivasa Rao are wasted.
Technicalities::
Devi Sri Prasad is the main culprit of this film. He plucked out the life of the film. His songs and BGM do not give film any kind of weight. In fact, they pull the already average scenes down by 70-80%.
Praveen KL as an editor should have concentrated on the momentum of the film. It is too slow for a regular commercial masala and many scenes could have been chopped out. Even the slow motion shots seem pointless and may be he could have pointed it out to the director and made a better cut than this.
KU Mohanan as a cinematographer did what was asked of him well. But his work doesn’t really give a character to overall film and narrative structure.
Hari, Solomon seems to have spent all their time like Marvel writers. Marvel writers read comic books for their story progression and these two saw all blockbuster films from other languages. They brought all the comic book heroes to life and these two remaked all the good scenes from popular films as Maharshi. Truly inspirational writing!
Vamshi Paidipally as a story teller fixed on one goal and one goal only, watch ten films and make one film. Don’t bother about giving your story a character that suits it best. Just make a film that looks to ape everything good from others so that people will experience same emotions however he makes. This ideology might work once or smaller stars but not on big stars like Mahesh Babu, whose films are looked upto as trendsetters.
Positives::
Mahesh Babu Looks
Pooja Hegde glamour
Production Values
Negatives::
Thin Storyline
Unnecessary Non Linear Narrative
Loud Score
Logicless scenes and pacing
Skeleton less Characters
Completely lagged Second Half
Analysis::
Telugu movies have become unofficial remakes of old or other language popular films. Our storytellers stopped telling stories and are focusing on adding items to a skelton less structure. This Maharshi is one more example of such film. Vamshi Paidipally used every film he can find for his Brundavanam story and in Yevadu he made two films within one.
Only in Oopiri he could really make one film that seemed to have a structure. Again in Maharshi, he went back to his roots. Brought in 3 Idiots, Swades, Srimanthudu, Bharat Ane Nenu, Okkadu, Kaththi, Sarkar, Dhanush’s Kodi, Padipantulu, Khaidi No. 150, Pandanti Kaapuram, Shivaji and many more. Well, when you can get one film trying to remake the scenes that worked in different films then do you need a story, screenplay and characters that really hold them together? Vamshi felt it doesn’t!
Rating: 2/5