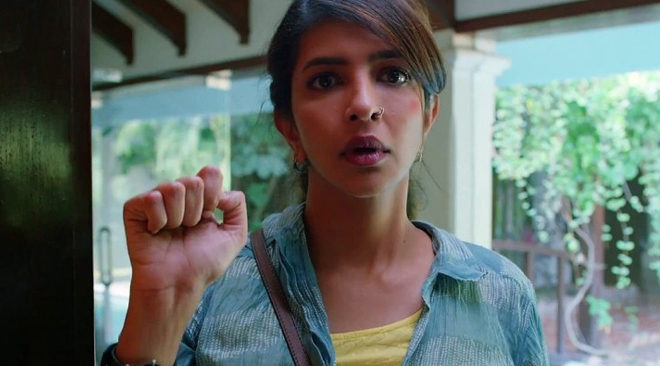 There are certain films that leave an impact on you while watching and certain films that just pass by and you don’t feel anything even though they seem decently entertaining for the run-time. And there are films that try harder and get everything going in their favour at least for few minutes and then fall into an abyss of darkness. Is W/O Ram one such film? Let’s discuss …

Deeksha (Lakshmi Manchu) survives an attack on a hill that kills her husband, Ram (Samrat) and her unborn baby. She is determined to find the killer as she wants to find a man wearing hoodie, who she claims to have attacked her.

Police Inspector doesn’t really take her case seriously but Constable Chari (Priyadarshe) accompanies her as she starts her own investigation with true determination. She tries to find some clues and finally locks down on Rocky (Aadarsh Balakrishna), who is her husband’s close friend. Why did Rocky kill him? How will she meet him? Is a twist waiting for us in the climax? Watch the movie for answers…

Lakshmi Manchu tries her best to look like an innocent wife. But there is a different between a person really innocent and a person who is play-acting it. She had to catch something in-between but she played it completely in a wrong way that people can’t really connect with her character.

Adarsh Balakrishna is adequate as typical rich boy villain. Samrat Reddy doesn’t make any impact. K.S. Iyengar got a good role and he did perform well too. Priyadarshe did his best as the new recruit police constable.

Samala Bhasker, the cinematographer did a very good job in presenting the visuals convincingly. Film is not a top notch cinematography example, but a decent one for the budget.

Thammiraju’s editing is not as good as the film needed it to be. His cut feels like it is been made of second or third accepted takes than the first preferential ones. It seems like a lethargic effort than a compelling narrative.

Music by Raghu Dixit is good. His score adds to the suspense element but even the work that artists and scenes should do, is done by the score. That should have been avoided.

Trying make her an sexual abuse victim doesn’t support the crimes she committed either. A twist in the tale needs carefully plotting and the explanation needs to come early than later. Once you have no interest to sustain, you show hundred visuals they just look like unnecessary extension.

Over reliance of convincing the crime than actual plot.

When you watch a thriller, you expect the movie to run at a pace that you don’t mind and have a runtime that makes you really sit up and notice, the next time what you have missed. W/O Ram starts with a good idea but then fizzles into cliched territory and escapes into it completely.

You don’t feel the fear or suspense or you don’t even get thrilled by the proceeds. All you can see is a film that could have been a good thriller had it did not try too hard. It tries to take itself too seriously and the actors are asked to try and perform suspense than circumstances really creating it. On the whole, it is another film from Manchu Lakshmi which had a good idea but failed in execution.