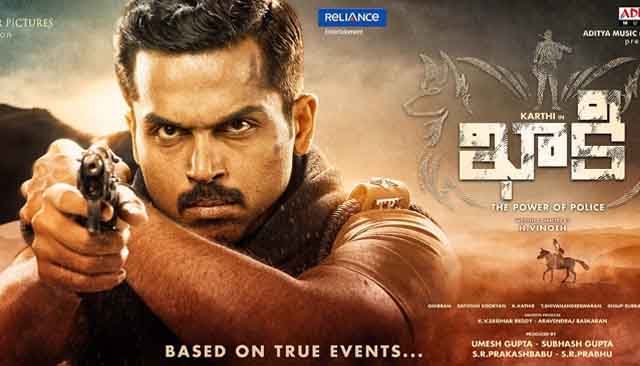 A dutiful citizen and a responsible person can never accept the crime rate growing in our country. They try to take up the jobs of police and IPS officers to help reduce it. In their life, they go through different emotions and solve big cases without thinking about their lives. What drives them? Why do they go so far? Karthi tries to bring a real case to life on screen with his Khakhee. Let’s see how he did so ..

A gang of robbers unleash themselves on Tamil Nadu state. They start robbing random houses and kill people like animals. None of the police officers take the case seriously and the lack of evidence pushes the files into unsolved cases.

Dheeraj (Karthi) takes charge as DSP and he finds out a clue to solve the mystery. One night when he is close to catching them, his wife (Rakul Preet Singh) gets attacked by the gang. Dheeraj takes it as a personal vendetta to solve the case and how he catches them by risking his life forms the rest of the story.

Karthi delivers a good performance as a lover and a police officer. His body language and his simple style in bringing the life of a police officer is noteworthy. He doesn’t try to be Singham type police like his brother Surya and let’s the character show on screen than himself.

Rakul Preet Singh has a small role to be the eye candy of Karthi’s character. Even though their love story is important to what director wanted to establish it seems to an after thought than being an integral part in the script from the inception. Her parts just drops the movie pacing.

Abhimanyu Singh as the Villain Om Prakash looks menacing and delivers a good performance. All others are adequate enough for the film.

Cinematographer Sathyan Sooryan did a good job in presenting the locations and the action sequences. But the film doesn’t have a good consistent tone in the quality of visuals.

Editor Shivanandeeswaran could have improved  the overall impact of the movie. His cut for few action sequences dilute the entire impact and we feel really robbed of an experience by it.

Ghibran gave a good score in back ground but his songs doesn’t really reverberate with the feel of the narrative. He needed to understand the script more.

Writer and Director, H. Vinoth brings the case to life with honesty but it looks like a Neralu – Ghoralu or a Crime Patrol episode rather than a complete exciting film due to the editing pattern and screenplay techniques he adopted. The major action sequences and Karthi, save it from completely being a TV film and a documentary. In the drama scenes, he tried to induce a romance track but that backfires his narrative.

Detailed explanation of the case.

Action sequences that drag on and drag

Least impact in the climax and interval sequences.

Too long duration for an investigative drama.

The main plus point of the movie is that it is honesty of the makers to bring the cop drama in the best authentic way possible. But the movie lacks an impact that could have made us stand up and notice the heroism of the original cops. H.Vinoth tries to make an engaging film but it lacks the impact.