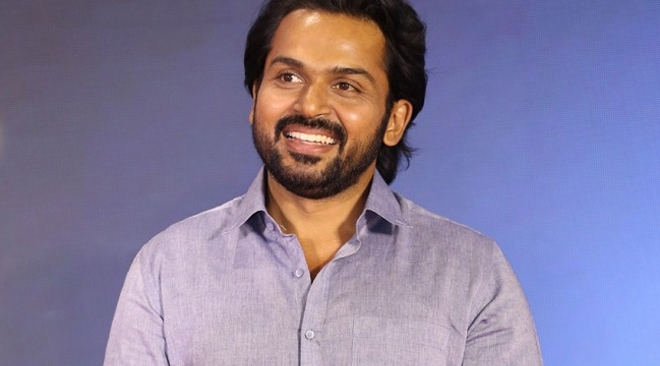 Angry Hero Karthi is coming with different action thriller ‘Khaidi’ Produced by SR Prakash Babu, SR Prabhu, Tiruppur Vivek under Dream Warrior Pictures in Lokesh Kanakaraj’s Direction.  The film is getting ready to hit the screens worldwide on  October 25th  as a Diwali gift. Sri Sathya Sai Arts KK Radha Mohan  Presenting ‘Khaidi’ in Telugu states. the team has arranged a Grand Pre-Release Event on October 20 at JRC Convention Centre, Hyderabad.
Rakendra Mouli said: ‘Khaidi’ is an action thriller, but the film has a strong emotional quotient. The same is the driving force of the ‘Khaidi’ character. Each character in the movie has the same arc, purpose, closure. The movie takes place in one night. One must appreciate Director Lokesh Kanakaraj for his wonderful presentation of the story. Every scene, every episode is written intriguingly. 2 Hours 20 minutes gives the Edge of Seat Experience to the audiences”
Producer BVSN Prasad Said: “Karthi became very close to the Telugu people with every movie. He is the most popular hero in Telugu as well as in Tamil. All of the films with ‘Khaidi’ title became hits. I want this movie to be a super hit too.
Film Chamber Ex-President Purvi Raju said: ‘I wish everyone in the team a big success this Diwali”.
Producer Tagore Madhu said: “All the best for the team”.
Actor Naren said: “I am happy getting introduced to the Telugu industry, one of the biggest industries in India. The three people I have to thank today are Karthi, SR Prabhu, and Lokesh. This is the perfect time for  ‘Khaidi’ to release in Telugu. In this film, I acted as a police officer. The movie will definitely become a big hit”.
Dream Warrior Pictures SR Prabhu said: “Thanks to Karthi Garu for doing this film. Thanks to Radha Mohan for releasing this movie in Telugu. Thank you Adivi Shesh who came to support our movie. All of you will enjoy the movie very well”
Sri SathyaSai Arts KK Radha Mohan who is Presenting ‘Khaidi’ in Telugu states said, ” This film is quite different from the regular films. It runs on a unique concept without Songs and Heroine. This different action thriller has a father-daughter sentiment angle which is very crucial in the film. I am very happy to release the film on Sri Sathya Sai Arts banner for the audience of Telugu States.
Hero Adivi Shesh said: “I bought a black ticket to watch the movie ‘Awara’. Loved the  Khadi trailer and tweeted about it, and came here.  I am a fan of Karthi movies. Along with all of you, I will see the movie in theatres on October 25th”
Angry Hero Karthi said: “You all received Khaki very well and the film has become the address for me to experiment further. Another such ‘Raw’ film is ‘Khaidi’ after Khakee. Kanakaraj Garu made a Super hit film before this. When he narrated this story, He said that “this is a new idea and you will like it ” Upon hearing it seemed like a big Hollywood action film. Many complained that there is no heroine, no songs, no comedy track in the film. But, I said that these factors are going to give big publicity. The way the movie is presented is very good especially the live-action thrilling part on the lorry. The film is made by the director with Young Team. I met Adivi Shesh after a long time. We both have an identical Journey. We both like movies like these.
This is not just an action movie, the film has a beautiful emotion, a ‘Khaidi’ who ends up in person for ten years. He has a daughter who has never seen before. The story happens in four hours in one night. Can he see his daughter in these four hours? Or not? is narrated very intriguingly in the movie. This is a mass stylish action film. I am very fortunate to have such a big title. All hero’s fan support is essential to a movie like this. We’re waiting for your feedback. Thanks to everyone who came here”