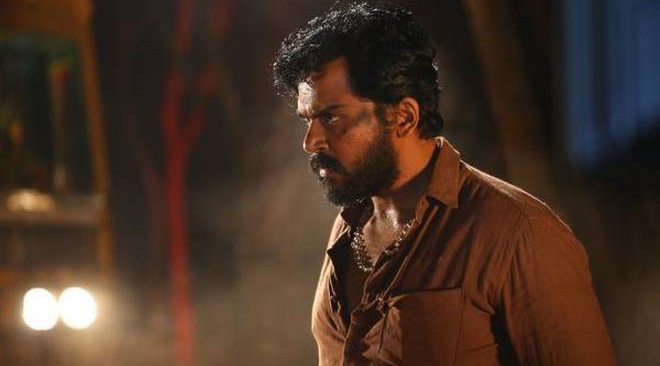 Star Cast: Karthi, Narain, George Maryan, Ramana, Dheena, Deepthi
Crew:
Music by Sam CS
Cinematography Sathyan Sooryan
Edited by Philomin Raj
Directed by Lokesh Kanagaraj
Produced by SR Prabhu
Karthi took time to come up with commercially viable films but his major strength lies in selecting films that have an unique storyline and solid execution. He doesn’t need star vehicle kind of scripts and the success of Kaithi might give him confidence to go forward with these kind of films. Lokesh Kanakaraj has put his heart and soul in the script writing and execution as well. Why we are praising this movie so much, let’s discuss …
Police Officer Bejoy (Narain) and his team catch hold of a ton of cocaine and they even arrest people who are transporting the load. Their confiscation needs to be stored at the safe place and police officers who are involved in the operation needs to be saved from attacks as well. All this stuff happens in one night and unimaginably Delhi (Karthi), a murderer who got 4 years exemption from his life imprisonment, becomes the saviour. Was he able to save all the officers? What did he loose and what made him take up the job in first place? Watch movie for answers …
Lokesh Kanakaraj as a writer shines bright in this movie as he needs to develop a wafer thin plot line into a full blown adrenaline rush infusing screenplay. We enjoy the writing and character introductions as the set-up slowly builds up to an engaging segment and then it leads to another segment organically. It doesn’t stay at one area of interest even though it is all happening in one night.
The writers find a way to introduce us to the new elements like levels in the game. If one level is crossed easily, the next level gets tough and the next level even tougher. Imagine all this being built up organically without rushing. You know how the movie ends but the writer manages to keep you guessing and land a twist or two, without letting you feel like you’re watching a film that is looking to entertain you by hook or crook.
Performances by Karthi, Narain, Deepthi, George Maryan and all others entertain you to the core. Karthi didn’t have to do much of heavy lifting and his shoulders seemed very assured in this film. Nowhere did he loose his character and nowhere did the director let the intensity drop at any point. Technical wise cinematography by Sathyan Sooryan and editing by Philomin Raj are the best in recent times considering the budget and story of the movie.
As a director, Lokesh surprises you with the deft touch he showcased in handling varied emotions. His parallel screenplay and command on handling complete night time visuals with right framing and logic engages you to the screen like a visual involve tiger and deer. This is a rare movie that offers you enough time to process all the happenings on screen, at the same time, give you a feeling that everything is happening fast. Watch it on screen and do not miss the experience.
Rating: 3/5