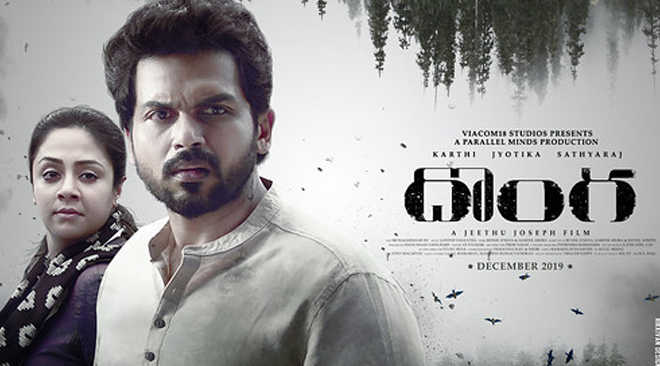 Cast: Satyaraj, Jyothika, Karthi, Sowcar Janaki, Seetha, Nikhila Vimal
Crew:
Screenplay by Rensil D’Silva, Sameer Arora, K. Manikandan, Jeethu Joseph
Story by Rensil D’Silva, Sameer Arora
Music by Govind Vasantha
Cinematography by RD Rajasekhar
Edited by VS Vinayak
Directed by Jeethu Joseph
Produced by Parallel Minds Productions, Viacom 18 Motion Pictures
Karthi managed to score a big hit with his Kaithi when no one expected him to do so. The actor is back with another film and this time, he has his sister-in-law, Jyothika in the cast for the first time. He decided to work with a writer-director like Jeethu Joseph, who made Drishyam. Movie released as Donga in Telugu and Thambi in Tamil.
Story follows a political hi-profile family that lives in Mettupalyam. Sarva, son of local MLA (Satyaraj) goes missing 15 years ago. They keep searching for him everywhere. Finally, a thief Vicky (Karthi) from Goa is identified as Sarva who lost his memory. Everyone in the family suspects him but MLA and his wife accept him, instantly. Vicky is an imposter appointed by a police inspector and he threatens Vicky to finish his heist soon. Actually, MLA himself appointed police officer to bring an imposter as his son. Why? Watch the movie to know more.
Karthi scores high as a performer in this movie as his eyes speaks volumes in each and every shot. He comes up with something fresh in the film everytime camera cuts to his close. Jyothika and Satyaraj are very good too. Sowcar Janaki pulled off a difficult role with ease and Seetha was permitted to few close-up shots. Nikhila Vimal is underused in the film.
Technically, movie is very strong in Cinematography department. But editing could have been better as the film seems to have dragged on more than required. Music by Govind Vasantha is too routine and his BGM doesn’t really help the thriller. Writing is too weak for the film.
Even though there are four writers, none of them seem to have had proper vision on how to explore the story. They tried to take it in one direction for long and then delivered twist after twist. By the time, real story is revealed we lose interest in the proceedings. They had a very different storyline but tried to explore it a routine format. Also, they seemed to have missed few logics in mounting the story properly. The main twist doesn’t really work in favour of the family or the protagonist, in anyway.
Director Jeethu Joseph is a strong narrator and he could tell the story in a very engaging manner. But he lost his touch as the screenplay started to go for twists and even though one or two were engaging, rest just seem not fit, at all. Movie could have been much much better but it lacks any real conflict or depth to really root for it. You can try this film, if you don’t mind watching a known story explored very slowly and with twists that appear silly or if you’re a fan of the performers.
Rating: 2/5