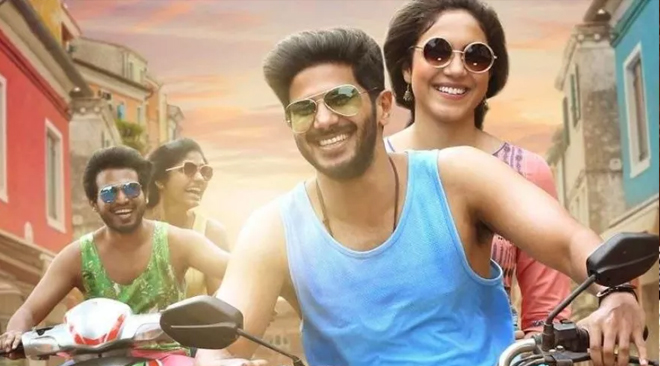 Cast and crew:
Dulquer Salmaan, Ritu Varma, Rakshan, Niranjani Ahathian, Gautham Vasudev Menon and others.
Music: Masala Coffee
Cinematography: KM Bhaskaran
Background Score: Harshavardhan Rameshwar
Editor: Praveen Antony
Director: Desingh Periyasamy
Producers: Viacom 18 Studios, Anto Joseph Film Company
Dulquer Salmaan found a good amount of popularity in Telugu Cinema after his act as Gemini Ganesan in Mahanati. Ritu Varma is known as Pelli Choopulu girl in Telugu households. They both came together for a film in Tamil and it released in Telugu as Kanulu Kanulanu Dochayante. Is it worth your time? Should you watch it immediately or you can wait? Let’s discuss …
Siddharth (Dulquer Salmaan) and  Kalis (Rakshan) work as App Developers and Animators. They like to freelance and spend more than they earn. Sid meets Meera (Ritu Varma), a beautician and falls for her simplicity. His friend Kalis falls for Shreya (Nirajani Ahathian) and we get to know that Sid, Kalis are actually conmen. ACP Prathap Simha ( Gautham Vasudev Menon) starts searching for them but they escape from a situation of getting caught. Both conmen decide to end their crime based life and settle with their lovers. And ACP find their location. What happens next? Watch the movie and know for yourself.
Dulquer Salmaan gave his 100% but the writing doesn’t compliment his effort. He doesn’t need new words to describe his talent. Had the writing complimented his efforts, he would have carried the movie, effortlessly. Ritu Varma couldn’t really handle the conwomen character. Rikshan and Niranjani are okay. Gautham Menon has convincing screen-presence as police officer.
Music in the film is good. Cinematography by KM Bhaskaran is okay and the movie could have had better tone. Praveen Anthony editing is not upto the matter. This movie takes everything so lightly that we feel, take this thread or resolution at least slightly seriously and give us some background. Still, the movie tries hard to subvert expectations and give a twist that blows your mind, so hard that you feel the writers are smirking somewhere in the background thinking they misdirected the audiences brilliantly. But in actuality, they missed the mark by miles. Misdirection works with clever setup not because you wanted to blow someone’s mind by hook or crook.
When it comes to execution, the movie depends on Dulquer Salmaan’s likeability more than the actual character being strong enough to charm you. A conmen is able to pull off the con convincingly because of his inherent ability to pull the rug off your feat when you least expect. Such kind of clever schemes engage us when the characters work but here they don’t. This film could have been better with a well balanced screenplay but the writing is so uneven that you feel boredom most of the time. Our recommendation is to wait and watch the movie, at your leisure.
Rating: 2/5