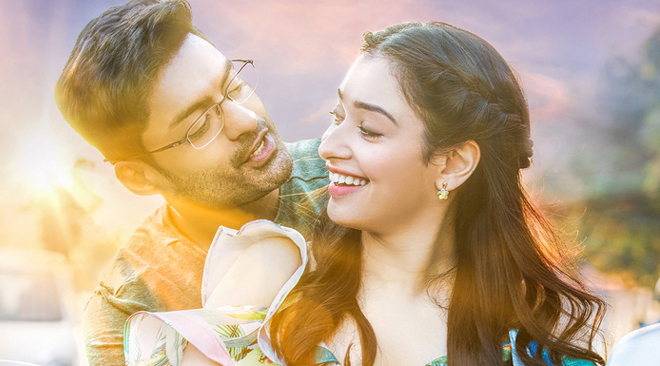 Destiny is a word, we use mostly for the phenomenon that is humanly impossible to explain. In plain words, things that don’t appear to have a complete and compelling logical explanation but happen in front of our eyes, we call it destiny guidance. With a romantic tale that tries to elaborate on this idea and deliver a compelling story, Naa Nuvve came into our theatres. Let’s see how it is ..

Meera falls in love with Varun, thinking he is her destiny and some chance encounters make her believe in that. But Varun believes that there should be a logic behind them meeting and falling in love. So, did they fall in love? If they do fall in love, will they successful be together? What differences will creep up in their relationship? Watch the movie for answers

Nandamuri Kalyanram tries to pull off an uber cool person who has shades of ego and tries to prove that there is only logic behind things happen around us but nothing that can be proved as destiny. He is good in parts but when it comes to developing a believable chemistry with Tamannah, he fails to do so.

Tamannah, is a good performer but she needs a consistent character to shine. The movie goes through tonal changes so often that her character seems highly inconsistent and boring. Her portrayal of the character is good but as the character is not so likeable, we feel even her performance not worthy enough.

All others have been wasted in inconsequential roles.

Sharreth, the music composer of the movie tried to give a consistent score to the film with more salsa and ballroom dancing style music, dominating it. Background score follows Ilaiyaraja template at most places.

PC Sreeram proved again that he is master of lighting. He gives the movie, a mystic and mythical feel throughout. It is his work that helps us get through a rather boring film.

Subha, the writer of the film, seemed to have been blown away by the possibilities of destiny related sequences and did not really care about the characters and consistency of the tone.

Editor, Sathish Surya, tried to make the film as crisp as he can but the screenplay demanded it to be boring nevertheless.

Director, Jayendra proved that he has an inclination to create magical moments on screen in his first film. While there are sparks here, the age old feel of the movie doesn’t really get involved in the proceedings. When you know what is that going to happen, you at least need to keep how it will happen interesting. Director fails miserably in capturing that.

When your movie is based on musical elements that many fail to understand then you need to keep to simple to let the audience soak in, everything you tell on screen. Here, the director gives you ample time to soak in everything and also, keeps it too simple that you can out guess everything. So, we end up nausea and boredom throughout the runtime. A misfire from a talented bunch of technicians.