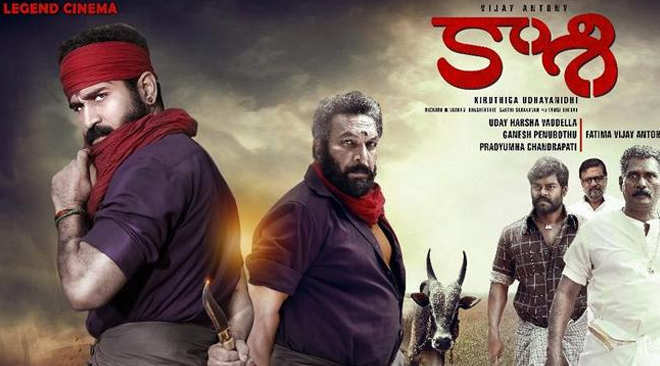 Normally actors promise to make different movies every next one. They never say they are coming with a routine story or complete commercial drama. After watching, we end up feeling the film being highly routine and boring. But there are few actors who try to really stand up to that word and give different films. In ideal world that should be a huge advantage. But that can be a huge problem too. Vijay Anthony is the best example of over-doing the different film every other day.

Bharat (Vijay Anthony) is the CEO of Bharat Multi speciality hospitals in USA. He gets to know that he is an adopted kid and flies to India, to know his real parents. A dream related to his life before he got adopted haunts him and with that memory, he tries to trace out his parents.

Vijay Anthony played four characters in the film.  But he did not try to act in even one of them. He even played Romeo character in the film, in addition to it. He is unable to figure out a way to improve his acting skills and if he concentrates on at least trying to emote, he would be a help to the young filmmakers who are trusting him.

Shilpa Manjunath impresses us with her simple and nuanced portrayal. Anjali is wasted and Sunaina doesn’t get a complete character. Amrita Iyer us good in parts.

All others like Madhusudhan, Naseer Kameela, Jayaprakash, Yogi Babu doesn’t get strong characters to perform.

Richard M. Nathan’s cinematography is good and his visuals are very good. But the story doesn’t really give him enough material to explore much. He did try his best.

Lawrence’s editing is not really of top quality but he tries to give the movie a meaning with his crisp work. Still, the movie ends up feeling over-long within the runtime.

Vijay Anthony covers up for his lack of acting skills with his back ground music and songs. He scores better back ground music than songs and we feel, if there is a good actor then his work would have been a highlight for the movie for sure.

Kruthiga Udayanidhi is the writer and director of the film. Her story could have been a good short film rather, in trying to make it a commercial hit, she adds elements that don’t really suite the story. Her ideas in staging and blocking are god but few scenes just feel like a copy of many other big films. The script really hurls through different stories rather than trying to narrate a simple father-son story.

The major minus of the film is that the story doesn’t have a clear emotional core or direction.  It keeps oscillating between being emotionally relatable to unintentionally comedy. The tragedy of this movie is not the idea behind trying a new way of filmmaking but it trying to induce forced emotions without really trying to connect us with the characters. The very old scenes also harm the flow of the story.  On the whole, Vijay Anthony needs to think about his choices. He cannot just try anything that remotely sounds different, he needs to concentrate on really making a good movie going forward.