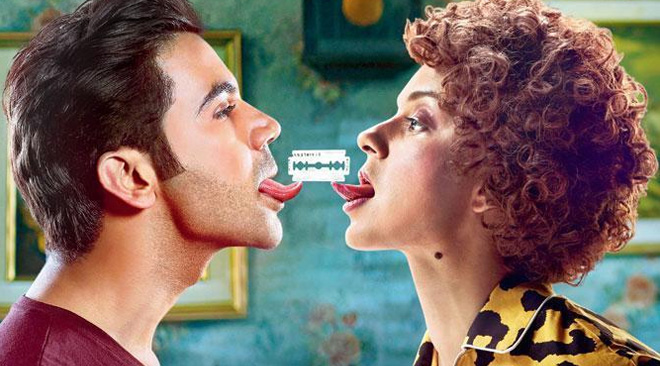 Cast: Kangana Ranaut, Rajkummar Rao, Jimmy Shergil, Amyra Dastur
Written by Kanika Dhillion
Cinematography by Pankaj Kumar
Edited by Nitin Baid
Music by Arjun Harjai, Rachita Arora, Daniel B. George (BGM)
Directed by Prakash Kovelamudi
Produced by Ekta Kapoor, Shobha Kapoor, Shailesh R Singh
Women empowerment in films is always discussed from male point of view, how should a male should understand female is said more than how should a female understand male psychology, no one ever said it out loud. This film, Judgementall Hai Kya tries to take that route in a twisted way. It tries to keep the movie as a thriller than a take on journey of awkward and slightly ill person from understanding she has trust issues. Well, it does the job of being a thriller and a journey too.
A double edged sword script by Kanika Dhillon is understood well by Prakash Kovelamudi and surprisingly he gives his characters more importance and dives into the psyche of both the protagonist and antagonist at the same time. We have to carefully observe the parts where Antagonist point of view is also touched upon but movie majorly sticks to protagonist point of view, without really letting us know which way the movie is going to end.
As it is all in the mind, the director also executed the movie as a mind game, that is, a game played by mind of a trauma patient than a normal one. It tries to keep the protagonist a representative of all women while establishing her as a patient suffering from Dissociative Identity Disorder. It helps to keep the narrative racy and maddening at the same time.
The writer wants to show a mirror on how easily we trust and at the same time asks you to keep the trust doors open. What we see as normal can be abnormal and abnormal normal too. It all rests in perspective and that difference is brought out well by the director. You have to go through what a patient goes through to really understand them.
And only when you understand them, you can do anything about their issues. Also, if you cannot be patient and trustworthy, no one is going to really believe in you too. So, there is a give and take that one needs to follow in the society that is all about trying to mask you real self. It is hard to unmask and live real.
Film portrays that in a visual style and with a twisted logic like its protagonist. Kangana Ranaut is mercurial in her role and she shouldered the movie really well. She seems to be more at home when she is doing such complicated roles than Manikarnika type ones. Rajkummar Rao is really good and Amyra Dastur, Jimmy Shergill are good too.
Movie might not be a typical popcorn entertainer but it delivers on the promise of being an out of box movie that drags you into its zone, effortlessly. Still, if you’re looking just some fun ride, you may avoid it. But if you like to dwell into narrative, catch on the nuances and dig deep into intricacies, you can go for it, without any doubt.
Rating: 3.5/5