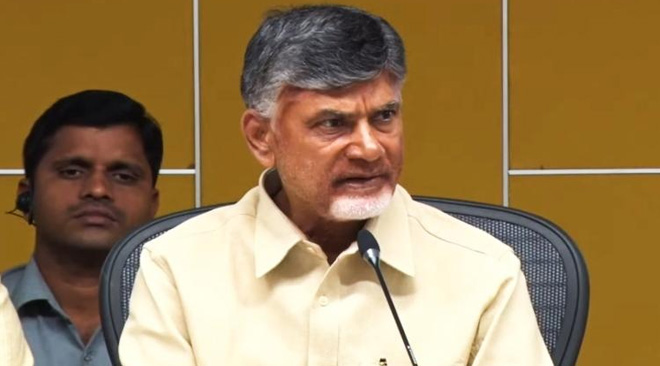 In an open letter to people of the state, the former chief minister called on them to join hands with the opposition and agitate for the strict implementation of the rule of law, “leaving no scope for the ruling party leaders to perpetrate their lawless activities any further”.

Naidu slammed Y.S. Jagan Mohan Reddy-led government for its various acts of omissions and commissions during the last one year.

The leader of opposition claimed that the young generation is not able to find jobs because the Jagan Reddy rule has driven away Rs 1.8 lakh crore investments in just one year. He alleged that the government borrowed Rs 87,000 crore in a year, but there was no commensurate development anywhere in the state.

“No new industrialist is daring to come forward to invest here. With their mindless activities, the ruling YSRCP leaders have ripped apart all systems and institutions,” said Naidu.

The TDP chief said over 70 construction workers have committed suicide while 600 farmers also ended their lives following mounting debts and lack of crop returns during coronavirus crisis. The government hiked electricity charges along with liquor and cement prices. This has placed a new burden of Rs 50,000 crore on the people, he added.

Stating that YSRCP was making more mistakes trying to cover up its failures, Naidu blamed the Jagan Reddy regime for “adopting a dangerous vengeful stand” in order to carry forward its mafia rule”. “It has bid goodbye to the people-friendly Ambedkar Constitution but is implementing the fanatical Raja Reddy Constitution,” the TDP leader said referring to Jagan Reddy’s late grandfather.

Praja Vedika (annex building to Naidu’s house in Amaravati) was demolished within days of YSRCP coming to power. He alleged that from the day he took oath as the chief minister, Jagan Reddy was targetting and harassing TDP. He said YSRCP atrocities claimed the life of former Assembly speaker Dr Kodela Sivaprasada Rao. Nine TDP leaders and activists were killed. Seven others were forced to commit suicide. Properties of 56 TDP leaders were destroyed. False cases were filed against 95 persons and another 167 families were put to harassment.

Stating that all sections were turning against YCP misdeeds now, Naidu said the government engineers have protested against ruling party excesses. “Through illegal sand transportation to other states, YSRCP leaders were plundering hundreds of crores. The natural resources were being looted. Over 13 lakh tonne sand was stolen by ruling party leaders in one year.”