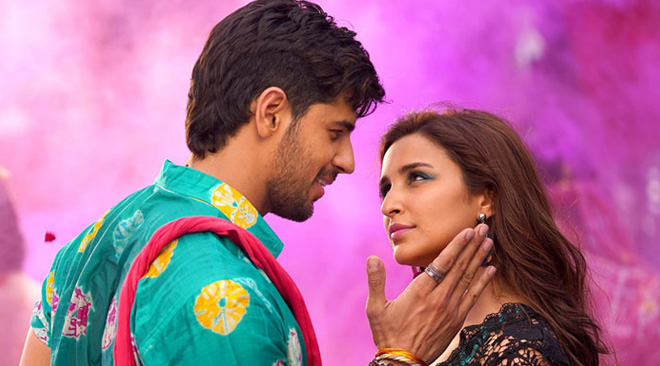 Cast : Siddharth Malhotra., Parineeti Chopra, Javed Jaffrey, Sanjay Mishra, Ruslaan Mumtaz, Alankrita Sahai, and Aparshakti Khurana
Written by Sanjeev K Jha
Music by Tanishk Bagchi, Vishal Mishra, Sachet Parampara, Ramji Gulati, Ashok Mastie
BGM by Joel Crasto
Cinematography by Vishal Sinha
Edited by Vishal Sinha
Directed by Prashant Singh
Produced by Balaji Motion Pictures, Karma Media & ALT Entertainment
Siddharth Malhotra and Parineeti Chopra did perform with a great chemistry in Hashee Toh Phasee. Their fans have been waiting for them to appear again on screen. Now, they decided to come with a more mass film, Jabariya Jodi. The movie tries to entertain you with characters and different situations but increasingly grows dumb as the movie approaches the finish line. It tries to tell the story of Abhay Singh (Siddharth) and Babli (Parineeti Chopra)’s love story with a backdrop like forced marriages.
Babli loves Abhay at the young age but they are divided by their parents. Abhay Singh becomes the best possible Jabariya Shaadi maker and he meets Babli again when he is performing a marriage. They both flirt again and Babli decides to get married to her father’s preference but Abhay objects. She thinks that Abhay is the groom when her father approaches his family for a Jabariya Shaadi. When he knows the truth, she swears to marry Abhay in a Jabariya Shaadi. Will she be successful?
See, the story is like thousand love stories mixed into one. It is fine but the stupidity in the way it is executed doesn’t let us forgive the makers mistakes. It increasingly grows boring as nothing much happens after a point. We get it that the movie is going for comedy but doesn’t really try to give characters good depth too. It tries to land one punchline after another but that attempt is also futile.
Prashanth Singh couldn’t really get the funny tone right. He tries but he is mixed up in being serious and unintentionally funny territory. No one expects logics from the makers in commercial films but audiences shouldn’t feel like they are being taken for granted. This film doesn’t really work when the lead cast is not in the frame. Others are sportive, try their best but the lines that land are more with leads and they too work because of the chemistry of the two.
Writer, Cinematographer tried their best to keep the momentum going but songs are a big mood kill and BGM doesn’t support anyone’s case. Writer too after a point ran out of ideas and lines. The script gets boring and repetitive in the second half. Climax takes time but if leads haven’t tried to save it, the movie would have fallen into unintentionally comedy zone.
As a film, Jabariya Jodi tried hard to be Bhadrinath ki Dulhania but it doesn’t have the comic spark that those films had. Also, the leads couldn’t really save the film as it kept digging itself into deeper pit scene after scene. You don’t have to rush to watch it in theaters even if you have enough time to kill on a lazy weekend, like this.
Rating: 1.5/5