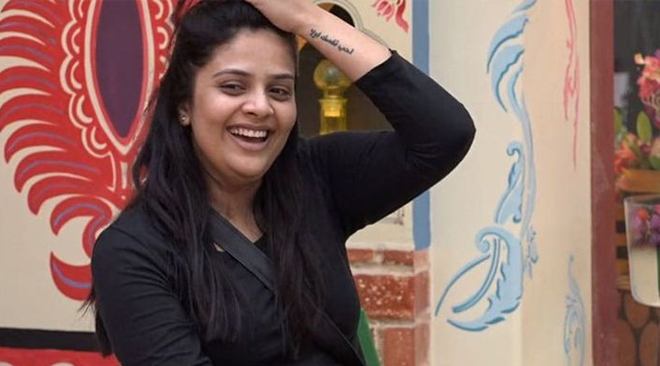 Sreemukhi as an anchor grew vastly popular in 3 years with Pataas being a pair of Anchor Ravi. Whenever Ravi entered into a controversy, she also suffered some consequences and tried to stay clear from them.
Until recently, Ravi and her are taken as a couple for sure. Even news channels tried to project that there was something  serious going on between them. Ravi defended that he never got married even when Lasya, his anchoring partner before, revealed the truth.
He recently came out with the family pic and even danced with his wife at a TV event show. He said that he loves his wife more than anything else and also revealed that their’s is a love marriage.
Now, contestants who came out from Bigg Boss show season 3 are talking about how Sreemukhi is driving the show and this doesn’t seem to be a selected outrage as Himaja, Hema and others also hinted at the same that Sreemukhi is key for many things in the house.
She was named by Sri Reddy as a person who is okay to go to any length for opportunities and her romance on screen with Ravi gave people a chance to point at her character and say that she goes to any length to be successful.
The reality of the matter always remains under the carpet. The Industry insiders say that she has a lovely relationship with every person who crosses her path and is too open and believing to anyone.
At the same time, she can get viciously angry for small things and break ties with anyone even friends. In any case, if Bigg Boss show is being monitored by her friends, will that be fair to others?
Is it a vicious and planned attack by people who are hurt by her popularity? Or all these people are trying to share the truth behind the scenes? We are unable to fetch enough details to confirm but when we observe the show, there is a bias and it is undeniable.
She doesn’t get much of the classes from Nagarjuna, the host, on Saturday and Sunday. She does anything and everything as if she owns the place. Even after Nagarjuna said that she isn’t the boss of the show, she maintains her game as usual. Over to people to decide, if she is being targeted or if there is truth to allegations! We will keep you posted on recent updates as always.