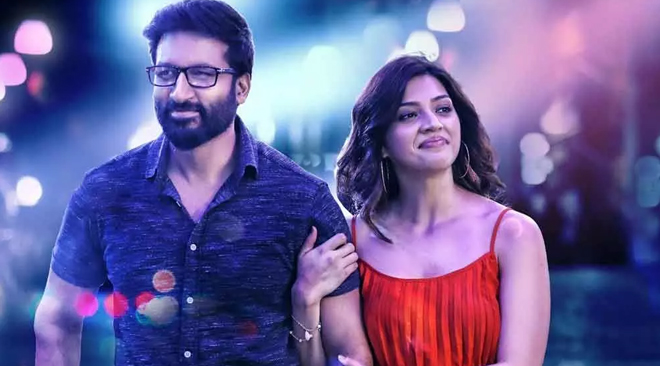 Cast: Gopichand, Mehreen Kaur Prizada, Zareen Khan, Upen Patel, Rajesh Kattar, Naseer
Crew:
Edited by Marthand K. Venkatesh
Cinematography by Vetri Palaniswamy
Music by Vishal Chandrasekhar, Sri Charan Pakala (BGM)
Story-Screenplay-Direction by Thiru
Produced by Rambrahmam Sunkara
Runtime: 146:44 minutes
CBFC Rating: U/A
The moment you enter the screen playing Chanakya, you feel like you’re doomed. It starts off in a highly disjointed way and continues to build on it more. As we get the second scene and as we progress to see the heroine introduction, the doom feels inevitable. Film keeps throwing at us unfunny jokes that we have already seen, it keeps randomly shifting genres and then it tries to follow the famous templates of Puri Jagannath, A.R. Murugadoss, Arjun Sarja’s patriotic films and many more from Bollywood like D-Day, Tiger Zinda Hai, Romeo Akbar Walter, Phantom, Satyameva Jayathe, Baby, Naam Shabnam, etc.
You name a film that has the theme of bringing  Dawood Ibrahim back to India and this film has a nod to it. In fact, we can call it a meta film that gives tribute to each one of them by blatantly copying from them. It doesn’t even leave out Vivegam from the mix. Writer and Director, Thiru seems to have gone for a video library to write this story and like Pencil Parthasarthy from Nani’s Gangleader, he used everything as it is. He tried to give nods to these films so much that, he even copied the get-up of Rishi Kapoor from D-Day in this film for his main villain.
According to the story, Dawood sorry, Ibrahim Khureshi (Rajesh Kattar) has a son, Sohail Ibrahim Khureshi (Upen Patel) who is equivalent to Saddam Hussain and Osama Bin Laden. He has body doubles and Ibrahim too depends on him. Whole ISI from Pakisthan, depends on him. The funny part doesn’t start or stop there. RAW Agent Arjun (Gopichand) goes on missions that Military rank officers from DEA perform. He even tries to go undercover as well just like Tiger (Salman Khan) from Ek Tha Tiger. The comedy crosses the borders of obscenity when Mehreen’s character start her dog mating comedy. Do you want me to tell more about the story, than this?
Operation Chanakya is the base of the movie and it doesn’t end with simple twists but mind blowing ones. Well, even if you are going to say that we have watched such twists in 80’s or 90’s films, the director seems to not listen at all. He is just fixated on making a movie about RAW operations as that seems new market obsession but he did not think about the logics or even masala moments.
The first joke you can think off when you say hero hides his real identity by being a Bank employee, is in the script. The last adult line you can think about giving to a leading lady is also in the script. That’s the beauty of this film. You can’t imagine the laziness behind the script and sincerity in being lazy while executing. You can feel that Gopichand, normally who is dependable as a performer just sleep walked. He seems to have just done his job rather than putting his soul into being a raw agent.
The movie is laced with bad performers and even bad performances from each one of them. Sri Charan Pakala just fills the screen with music and even though Cinematography is good, the editing seems completely off the professional standards. The random effects and even random cuts just make you cringe. Rarely, we see bad films with everyone performing worse than you can ever imagine. This film takes the cake of being the top one among them. You can skip it without any doubt.
Rating: 1/5