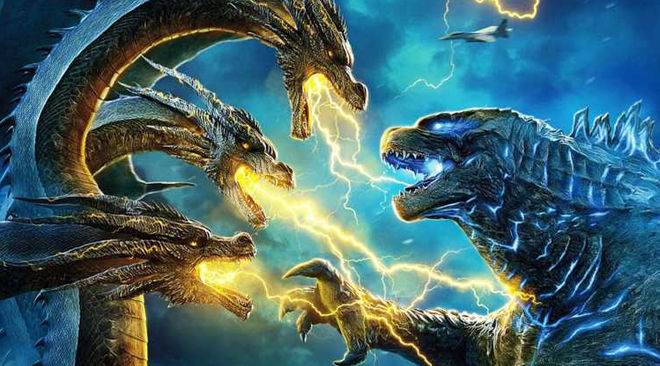 Cast: Kyle Chandler, Vera Farmiga, Millie Bobby Brown, Brandley Whitford, Ken Watanabe and Zhang Ziyi.
Crew:
Music Composed by Bear Mc Creary
Cinematography by Lawrence Sher
Edited by Roger Barton, Richard Pearson, Bob Ducsay
Directed by Micheal Dougherty
In a Monster film, we have to at the  least care for the monsters or the human characters. This Godzilla film tries to make Monsters likeable and Humans as the emotional core. It uses Monsters as just tools to have cool fights than give them a character to side them. In Game of Thrones, the writers could give Dragons also a character and charming quality. Their major use was burning things and saving their mother, at the same time, they managed to display great level of sense and understanding as well. Chaos should have a meaning and self-destruction should also have a sane or insane reason.
Since, Thanos of Avengers: Infinity War, made weird sense taking the ideology of a certain Joker from The Dark Knight forward, this film tries to give us such a reason for human character to meddle with the equilibrium of nature saying that the virus is Humans, themselves. It is not an issue to take the self corrective ideology to the level of self destruction but the decisions should be taken by characters we can route for or at least understand. But in this characters do things because they should lead to a monster fight. Other than that, they are just there to fill in the time gap from one big fight to another.
They jump from one sequence to another and from area to another just for the sake of giving us a movie that just works at best as a children’s film as mostly children don’t care for other things. In this day and age, when things are costly and families tend to watch films on repeat only if everyone of them can invest in it, at theaters, this kind of monotonic filmmaking just doesn’t fit.
To say that at least, the monster fights were well done, we don’t feel these monsters necessity in the film other than one fight against another because a human thought it is better to wake them up and control them. Doctor Emma (Vera Farmiga) looses her son Andrew due to Godzilla attack and thinks humans as the virus who needs to be eradicated by the Titans as they can bring new order. Her husband Mark (Kyle Chandler) and her employer, Monarch chief (Ken Watanabe) are against this ideology. She and her daughter, Madison (Millie Bobby Brown) decide to use ORCA, which can control the monsters as Alpha. But they wake up an alien Alpha and Godzilla has to reclaim the territory as the King.
Emma, as a character seems like a person underdeveloped and only in the film to decide the human fate and then seek redemption. The movie just looses the focus on what is the purpose of the entire story and goes on to pit the monsters against each other so bull-headedly that it all feels like a contradiction than a compelling film that adults can also enjoy along with children. Even children can’t really side with Godzilla as there is no purpose given to the character other than chase other Alpha.
The VFX of the movie is done well, the renders of the monsters are good but the over use of clouds, rain and sound effects, just make the sequences regular and not off great value. We don’t feel the stakes or the urgency behind the actions. Movies need to deliver on the idea that a big scale film can be scary, fun and exciting but this one just tells us that co-existance of human characters and monsters in a movie is myth. Gerath Edwards, did understand the scale of the movie but his 2014 movie, did not have enough monster fights. This one has monsters fighting like street dogs with no scale and stakes.
Movie fails to deliver on mythology and even on the ideology of humans vs humans – the ones who try to take control of things vs the ones who want life to take its course. And it also doesn’t give us a good take on Monsters too. While children can enjoy the action sequences, adults might just fall asleep.
Rating: 2/5