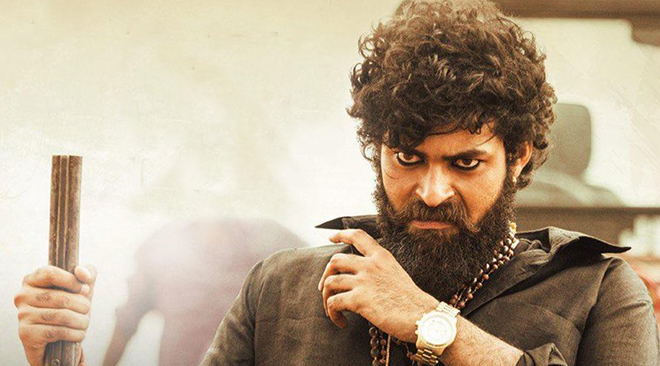 Cast: Varun Tej, Atharvaa, Mrinalni Ravi, Pooja Hegde
Crew:
Written By Karthik Subbaraj (original story), Harish Shankar
Adapted from Jigarthanda, National Award Winning Award.
Edited by Chota K. Prasad
Cinematography by Ayananka Bose
Music by Mickey J Mayer
Directed by Harish Shankar
Produced by 14 Reels Plus – Ram Achanta, Gopi Achanta
Runtime: 168:35 minutes
Certification: U/A
Jigarthanda became an instant classic in Tamil Cinema and many liked the movie as it is in South India too. It won National Award and  mainly discovered a talent like Bobby Simha. He won National Award for Best Supporting Actor. His role is done by Varun Tej as Gaddalankonda Ganesh in this adaptation, Gaddalakonda Ganesh (previously Valmiki). Harish Shankar bought the rights of the film and made it in Telugu after his film, Duvvada Jagannadam with Allu Arjun and Pooja Hegde.
The original is all about how an un-reformable person without any kind of shame or fear does crimes reforms after becoming a joker in films. Director of the film, takes revenge for making him go through hell while filming and also forcing him to take the rowdy as the main lead. But unknowingly, he transforms the rowdy into an actor and a good man. He transforms into a rowdy himself which shows how power corrupts a simple man and cinema, love can reform a cruel man.
Harish Shankar took the theme, 85% of the original and made it into a regular commercial film where the ending turns predictable. A popular hero like Varun Tej as to transform by the end of the film and people will be itching to get to that conclusion than wait for it. Jigarthanda since had a known hero as the director and a literal unknown as the anti-hero, the end became novel. Here, it became predicatable to the core and climax just dragged out the obvious.
Also, the movie tried hard to sell Varun Tej as Gaddalakonda Ganesh, a terrorising personality, whereas he is still not there as a performer. In his limits, he gave his best and kept the movie engaging enough but his parts seemed weak because the background score and dialogues had to aide him more than silences even when he is glancing. Again, original scored heavily as it never tried to oversell the premise and kept the proceedings as logical as it can get.
While the movie Jigarthanda is not entirely logical and has it own flaws, it delivers more on the emotional connect and engagingly narrated the story. Here, that engagment is highly missing, even if we forget the original and see this on its own. Narrating a very routine story in different form worked for the original and here, routine story is narrated in even more routine way. That style harms the film more than the crew anticipated.
Pooja Hegde was beautiful but her cameo is just added to get some more tickets commercially than add any weight to the character, she is playing and to the story. Varun Tej tried hard and showed that he is not afraid to take risks. But this film and role are too heavy and too early for him as a performer. Still, he gave his best. He is improving as an actor and may be in another film he can perform better than this in such a role. Atharvaa and Mrinalni couldn’t lend anything to the film in form of performances. Satya, Raccha Ravi, Brahmaji, Tanikella Bharani were good. Supriya Pathak and Annapurnamma were wasted.
Techincally Art Department and Ayananka Bose gave their best. Rest all tried something but they just ended up diluting the impact. Harish Shankar proved one thing that he is good at handling commercial regular films than the novelistic films. He diluted the original so much that this film is strictly one time watchable after sitting through almost 3 hours with patience. Yes, this is a patience tester and if you can’t bear such runtime, be prepared.
P.S: We did not find anything objectionable in using a great poet like Valmiki’s name for this movie. Even CBFC did not. Hope, people realise an artistic expression is never to hurt anyone. (Wanted to say this out in the review itself, so that people whoever are wondering why someone reacted so harshly, we can give our side of the story). Our intention is never to hurt anyone but to state the truth.
Rating : 2.5/5