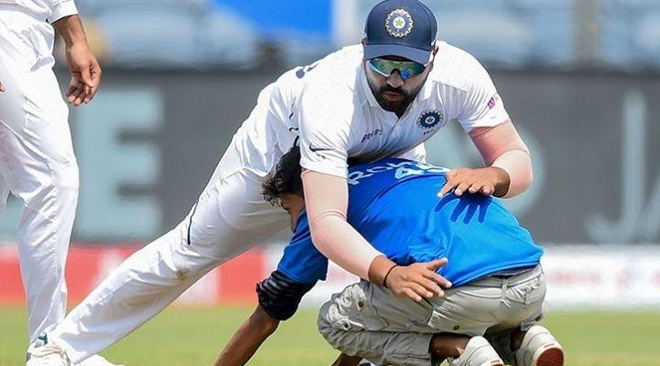 We often see some fans invading the ground to see their favorite players. In recent times we saw many incidents to former team captain Dhoni and captain Kohli. Recently, Rohit Sharma had another similar experience.

In the second Test against South Africa, India declared first innings at 601/5. The Proteas team was batting. A fan ran to Rohit Sharma, who was fielding and tried to kiss the Rohit Sharma’s feet and he grabbed Rohit legs and pulled him down. Seeing this security person rushed and took him away.

Former cricketer and commentator Sunil Gavaskar have expressed outrage on this issue who was on commentator duties at the time, “These incidents happen because security people are not watching the crowd but are watching the match. This has been the perennial problem in India. The security is not there to watch the match for free. They are there to stop such interruptions from happening,” he said.

Further said, “I say put the camera on the security and check whether they are watching the match or the crowd. Anyone can cause damage to a player. It has happened in the past, why take a chance. Remember, it is not easy to get into the ground. There are a lot of barricades, and still, these incidents are happening.”