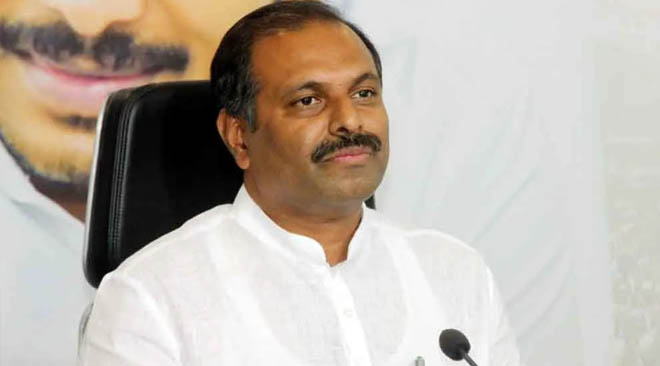 YSR Congress Party senior leader and Government Chief Whip Srikanth Reddy slammed the Telugu Desam Party on Thursday for resorting to cheap casteist politics at a time when the state government and the people together are battling the deadly Corona.

Addressing a press conference in Rayachoty on Thursday, he said instead of lauding and backing the efforts of the ruling YSRCP, which is giving Rs 2000 to every discharged Corona positive patient, the TDP was making highly deplorable comments on YS Jagan Mohan Reddy and his rule.

He said the TDP was resorting to petty politics to stall the introduction of English medium in the government schools. He said if the TDP has such love for Telugu medium, they should first admit their children in Telugu medium schools and not English medium schools.
Srikanth Reddy said that the TDP has no love for the poor students from the SC, ST, BC and minorities.

He also took strong exception to former state election commissioner Nimmagadda Ramesh Kumar writing a letter, in which he termed the present government a factionist government. Another former MP of the TDP was speaking in rabid casteist tone. These were highly despicable and reeked of sheer and shameless casteism. He said the TDP had resorted to similar cheap tricks while YS Rajasekhar Reddy was the chief minister. He said that the Chandrababu Government had gobbled up up to Rs 10000 for each mosquito and housefly killed. The TDP has played with the lives of the people from the BC community by withholding the Fee Reimbursement.

Compared to the petty rule of the TDP, the YSRCP has distributed rice even to those without white ration cards. Srikanth Reddy said the YSRCP government would also give permanent cards to all the poor people of the state. He further said YS Jagan Mohan Reddy would not be deterred by the cheap tricks of the TDP and its minions.