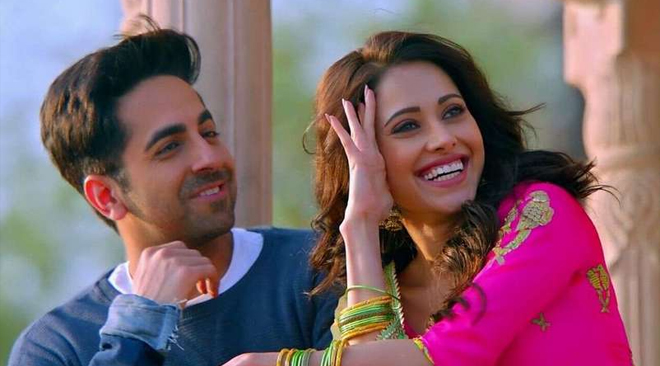 Cast: Ayushmann Khurrana, Nusrat Bharucha, Annu Kapoor, Manjot Singh, Vijay Raaz, Nidhi Bisht
Crew:
Written by Raaj Shaandilya
Music by Meet Bros, Abhishek Arora
Edited by Hemal Kothari
Cinematography by Aseem Mishra
Directed by Raaj Shaandilya
Produced by Ekta Kapoor, Nachiket Pantvaidya, Shobha Kapoor
Ayushmann Khurrana has been trying to go for different films and characters that challenge him as an actor more. He is in good form and even Dream Girl asserts that his acting skills are rare and we have to encourage his efforts to go for out-of-box stories everytime. But while his attempts are great, some films don’t rise above the basic level and that is when we feel more bad for the actor, as a script that doesn’t really go beyond the plot point waste his sincere efforts.
Annu Kapoor and he, bring back Vicky Donor kind of banter back on screen and they are hilarious. Manjot Singh is very good and Nusrat Bharucha is not given much to perform except for smiling shyly. The load is more on the males in this female friend story but the repetitive jokes kill the freshness after a point. Novel point in the script doesn’t really rise above cracking a witty joke here and an adult below the belt joke there.
Raaj Shaandilya who has experience in working as lead writer for shows like Comedy Circus, seems to have approached this script also as an elaborated skit which goes on and on for 2 hours. The characters he took, the premise he created, never raise the bar from staying basic. If you can think of a wise line about a man playing woman convincingly, it is there. If you can think of an adult joke with this man talking like a female to callers, it is there. Other than that, movie doesn’t try to showcase what it says in words on screen.
Loneliness is not an easy laugh-out-loud issue that in between ten jokes, you deliver one monologue and feel satisfied. Had the writer-director, tried to solve the issue of loneliness that the characters feel in an innovative way and then open the floor for monologues, it could have been easy to convince ourselves that the intentions were not to make a commercial film that touches on an issue but a commercial film that entertainingly tells you where the issue lies.
For example, a constable is a good poet but his character ends up being a laughing stock than the important characters in his story, understanding the need for him to be a poet. This is where a Badhaai Ho, a Article 15 or a Andhadhun could score points and Dream Girl lagged miles far away from them. There is no wrong in giving a good laugh riot and then keep a film at that level. But if there is a potential for more, why let it go to waste?
For a weekend fun, if you don’t mind jokes getting repetitive for 2 hours and a monologue resolving all issues, you can watch this one. Keep your expectations low and you will surprised with the level of witty one-liners you can hear in 2 hours about the same thing!
Rating: 2.5/5