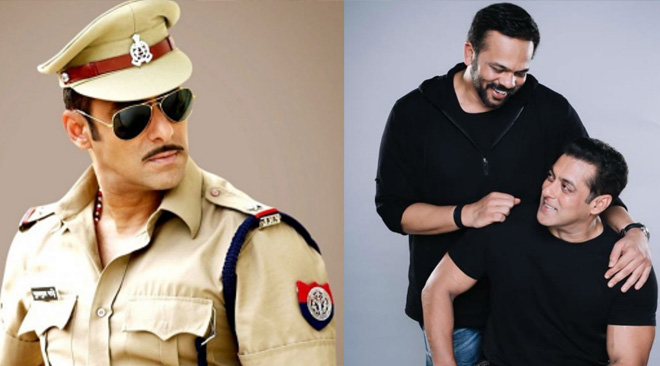 Salman Khan announcing Sooryavanshi’s release date seem to be given rise to new speculations that Dabangg Robinhood Pandey can join Singham universe of Rohit Shetty.
With Marvel proving the best way to deliver big action extravaganza going forward is to have a shared universe and one big film that includes all the characters that fans root for.
Rohit Shetty is looking to take Singham in that direction as he introduced Sooryavanshi, also as the part of the shared universe. Now, as the rumours if Salman Khan and RS coming together are going over the roof, Dabangg Pandey coming to the universe will make the movie, where Akshay Kumar, Ajay Devgn, Ranveer Singh and Salman Khan, all come together a huge colossal action bonanza.
Who will be villain if such a film happens? Our vote goes to SRK joining the team as the big baddie Don, for whom all four respected police officers from India have to search over the World. Isn’t this idea even bigger than just four police officers coming together? May be RS Avengers meet Don will be a great box office idea, if executed well.