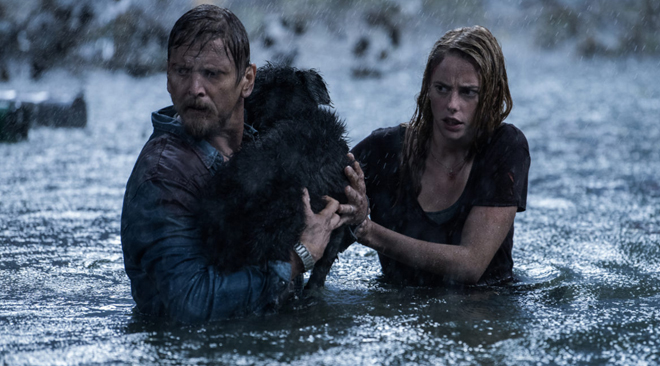 Cast: Kaya Scodelario, Barry Pepper
Crew:
Written by Michael Rasmussen, Shawn Rasmussen
Cinematography by Maxime Alexandre
Edited by Elliot Greenberg
Music by Max Aruj, Steffen Thum
Directed by Alexandre Aja
Produced by Alexandre Aja, Sam Raimi, Craig J. Flores
Crawl movie released for this silent weekend before Saaho Storm in India and that could be advantageous for the film for having a strong week. The movie doesn’t have top drawing stars but it has a simple plot, executed in fine fashion. The scares in the film are real and are not really written in a way that we can’t associate with it.
The movie premise is very simple. A girl who is going through crisis to prove herself as a swimmer in her career estranges from her father thinking she is the reason for their divorce. But she tries to find him during a bad hurricane in Florida as he doesn’t answer to her repeated calls. She finds him in their old house basement unconscious due to an alligator’s attack.
She has to survive a flood and alligators attack on their home. This plot is very simple and movie doesn’t stretch it for 2 hours too. It keeps it tight and makes every sense too. It doesn’t try to portray the two protagonists as super humans and it keeps their strength grounded in reality. It makes us face the claustrophobia while in the theater as the movie progresses.
We feel like we are being attacked by the gators for most part of it. There are cheap thrills, jump scares and raw blood spewing action scenes but all set in realistic environment than in a way that we don’t feel the rush. Even though the writers tried to stay on point their primary character’s emotional crisis doesn’t resonate with the attack and give us a triumphant feeling that they hoped for.
The execution of the thrills, acting by Berry Pepper and Kaya Scoledario help the film to make an impact. Movie could have used some more focus on the characters to connect us with them more. Still in clichés, Alexandre Aja finds good enough engaging thriller under 90 minutes runtime which we can enjoy without any regret.
Without thinking about too much of plot, if you are looking for a simple thriller to take your mind off from the regular life problems, this is the best possible film to achieve that for the weekend.
Rating: 3/5