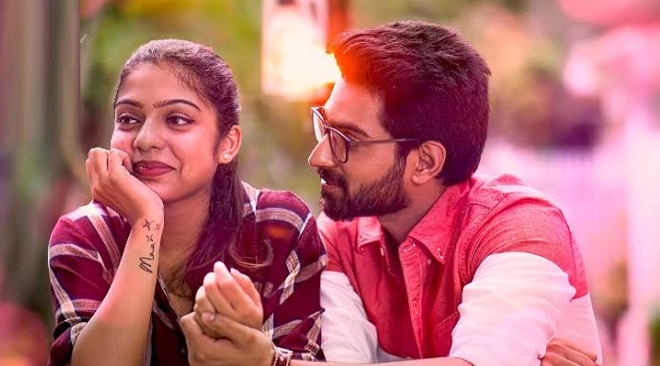 Cast: Shiva Kandukuri, Varsha Bollamma, Pavithra Lokesh, Malavika Satheesan
Crew:
Music: Gopi Sundar
Cinematography, Editing: Vedaraman Ravi Teja Girijala
Written & Directed by Sesha Sindhu Rao
Producer: Raj Kandukuri
Raj Kandukuri debuted as a producer with the film, Pelli Choopulu and that made him one of the producers to look out for. His next film, Mental Madhilo also showed his taste in finding talent. Can he get third time akso lucky, that too when he is introducing his son, Shiva Kandukuri as a hero? Let’s discuss about the film, Choosi Choondangaane …
According to the story, Sidhu (Shiva Kandukuri) finds himself confused in life as he lacks any focus. His mother (Pavitra Lokesh) finds him always wanting and due to her, Sidhu thinks of himself as a loser, all his life. He meets Aishwarya (Malavika) in the college and she breaks up with him towards the end of their college life. Later, he meets Shruthi (Varsha Bollamma) and their love story has more twists than you can imagine.
Varsha Bollamma has a very good screen presence. She looks a very beautiful and has a skill to perform as well. Hope she finds better scripts. Shiva Kandukuri is as wooden as an actor can get. He just doesn’t seem to get what the character is or what he needs to do. Malavika has a presence. All others are just decorative pieces.
Music by Gopi Sundar is not exciting enough. The composer is good when the team around him is good and he is bad when the team looks clueless. He is bad here. Vedaraman RaviTeja Girijala’s frames and editing is as per the director’s choice. Sesha Sindhu Rao had beats to write a romance but she just wrote a confusing piece as a screenplay that never takes off and engages you.
A character is defined by their journey than by their behaviour. In a story, what they are trying to achieve acts as a guiding force than just trying to say that they are behaving in a certain way. Behavior could be due to anything, but if that isn’t defined well enough, not just the characters but even the film looks confusing. You may not need Act A, Act B and Act C, structure in every film but a story needs to get to a place. It cannot just go wherever you feel you can take it just like that, not in a film. It needs to carry a motive and a character needs to follow a path from start to finish, so that if it seems confused, people understand and if it seems confident, people understand it. Randomly it cannot go from confident to frustrated to confused to confident to frustrated and then to confident. How much ever the writer owns all the rights to take his/her characters to wherever they feel he/she should be, the journey needs beats that connect with audiences. This one misses that.
Love stories are not easy to be written and are not sure shot hits all the time either. You need characters or good writing to work in favour of you for the film to look engaging and enjoyable. This one misses everything. Varsha Bollamma is a good actress and she pulled off her role well but rest all are just there as decorative pieces. Even writing and execution is bad to discuss about. This movie is a complete misfire on all levels. Had someone just read the script and tried to understand what is the real conflict, then the movie and story would have been better, may be. Try some other film than this!
Rating: 1/5