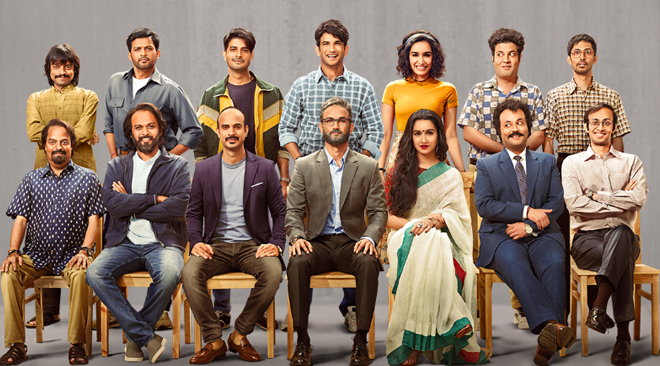 Cast: Sushanth Singh Rajput, Shraddha Kapoor, Naveen Polishetty, Varun Sharma, Prateik Babbar, Thushar Pandey, Tahir Raj Bhasin, Nalneesh Neel
Crew:
Music: Pritam; BG Score: Sameer Uddin
Cinematography: Amalendu Chowdhary
Editor: Charu Shree Roy
Written by Piyush Gupta, Nikhil Malhotra, Nitesh Tiwari
Directed by Nitesh Tiwari
Produced by Sajid Nadiadwala
Nitesh Tiwari made comedy is base and small town emotions with characters from middle class society as his biggest exploits in a film. He is not a big miracle worker like Basu Chaterjee or Raju Kumar Hirani but has a knack to make you sit through his films for the runtime. But his stories seem to be a stretch of old movies and classics rather than original. Few jokes, few lines and few scenes seem original but rest all have inspirations from some or the other film. This kind of balancing act works for him but when it doesn’t it leaves a sour taste.
Chhichhore manages to leave a sour taste and also land the cute sugary ideas with good dialogues. But the freshness, that we pray such a film with old theme have is not always present. At times, it seems like a blatant rehash and others it engages us with a new twist to old jokes. That makes the movie a character driven piece than a film, we need to watch for writing or story.
Dangal managed to connect with us with the earnest performances and this one depends on Naveen Polishetty as Acid and Varun Sharma as Sexa to hold your interest for most parts. Sushanth Singh Rajput and Shraddha Kapoor doesn’t have enough depth to their characters and we feel like it is an eye sore to watch them give similar reactions without any growth even as adults.
All the actors have given their best to keep the movie intact and we see that they all believed in director of Dangal’s vision more than in his script. Nitesh’s writing doesn’t seem as tight as his Dangal but there is enough for us to love and enjoy. Movie caters to our need to be engaged but it does feel long and stretched. Climax lands the message well, due to performances and that help us leave with some satisfaction after sitting through for almost 3 hours.
Editing could have been better and Cinematography is good. Art Department and Make-up artists worked well to get the reality in locations and change in ages of the protagonists. VFX work looks a bit patchy but it is not a complete eye sore. If not for performances, the movie would have looked like cheap rip off of 3 Idiots, Fukrey, October, Student of the Year, Jo Jeeta Wahi Sikander mixed in one with a desi flavor unlike Dil Chahta Hai’s urban and metropolitan feel.
If you can bare the weak moments, runtime and some unfunny jokes, performances from the cast will entertain you for tickets worthy, if you want to watch the film over weekend. No need to rush but if you’re interested you can go for it without any doubt.
Rating: 2.5/5