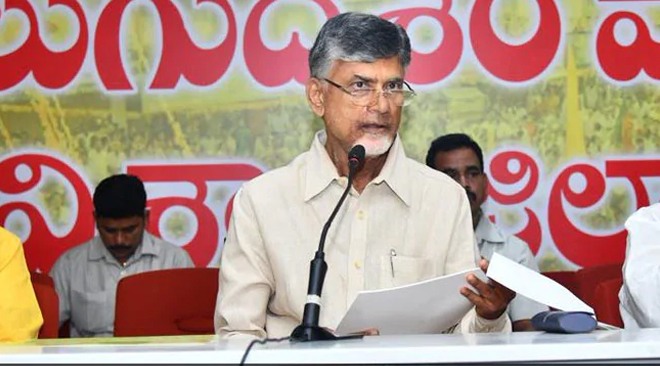 TDP chief Chandrababu Naidu once again showed his fondness on Janasena chief Pawan Kalyan. Naidu explained why they did not campaign for the TDP in Gajuwaka where Pawan Kalyan contested. YCP Chief Jagan Mohan Reddy’s comments during his campaign appear to be true with these comments. If Pawan Kalyan won, the situation would have been different. He also expressed the view that his behavior with the BJP was not correct. “We fought with the Center for state purposes. The state has not benefited from this and in return, this resulted in the damage of the party. If we would not fight with the Center the situation would be different. People who were benefited also did not cooperate with us” Chandrababu Naidu said. Naidu’s comments once again became the subject of political interest in AP.

TDP chief Chandrababu met with Gajuwaka leaders as part of his Visakha district tour. About 30,000 TDP activists have expressed their doubts about Chandrababu’s absence, a leader of the constituency told Chandrababu. At the same time, YCP leaders have been commenting that Babu and Pawan have a secret alliance under currently and as part of this Chandrababu did not do the campaign in Bheemavaram and Gajuwaka where Pawan contested. TDP leaders brought this to Chandrababu’s notice. The local leaders said babu that, TDP failed to counter these comments and this has left TDP activists in confusion. TDP chief answered this. He explained to them why he did not do a campaign in Gajuwaka.

Chandrababu responded to this. He made it clear that he did this only to show dignity to the chief of a party. “I did this so that we will not get affected by this and we don’t have an Alliance with anyone. If we have any such idea of Alliance we will do it openly. He agreed that with his absence TDP Gajuwaka candidate Palla Srinivasa Rao faced some difficulty. He might get more votes if I campaigned there,” Chandrababu clarified. While praising Rao for his work in the constituency he said that if Pawan Kalyan won the elections the situation would have been different. Now, these comments created interest in the political circles. A debate has been started that Naidu wanted Pawan to win and not his party candidate.

Chandrababu made key comments on his behavior with BJP. He agreed that we went with persistence and we had to face some difficulties. While saying that case was closed he advised the leaders to not repeat the same mistake. Seems like Naidu is showing his agony for the loss of his party