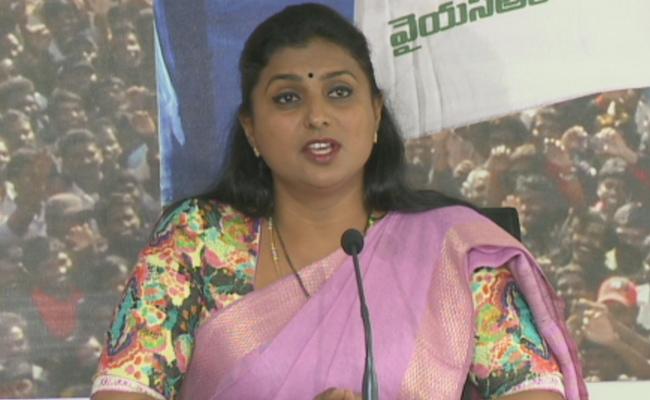 Dubbing the 1,500-day Chandrababu Naidu term laden with corruption and nepotism, YSR Congress has said that the boasting of fulfilling 99% of poll promises is absurd as the election manifesto was pulled out of the TDP website as the Party would be exposed.

‘During the previous nine-year term Chandrababu Naidu was in office for a record 3,178 days and people have banished him for 3,600 days for his corrupt and nefarious policies which affected every section of the society,’ party MLA RK Roja told reporters here on Sunday.

During the earlier term he had closed down a record number of Public Sector Undertakings and units in the cooperative sector for kickbacks and to favour his coterie and people had shown him his place in when 2004 elections have come.

During this term, he has closed down 3,600 government schools to benefit his cabinet colleague who owns Narayana groups of educational institutions and on the irrigation front, the projects were taken up only to benefit the contractors and not a single project was taken up or completed for the benefit of farmers unlike Dr YS Rajasekhara Reddy who has given a new meaning to agriculture and irrigation besides health care, education and social welfare, she said.

Union Minister Nitin Gadkari’s remark on the technical aspects had ripped open the corrupt practices of Chandrababu Naidu on the Polavaram issue, which was taken over from the Centre for kickbacks. Not a single welfare schemes was initiated by Chandrababu Naidu and those started by Dr YS Rajasekhara Reddy were been diluted, she said adding that he could not even complete the Telugu Ganga project started by NTR.

Chandrababu Naidu and his friendly media has been making a hue and cry that our leader YS Jagan Mohan Reddy has a secret pact with BJP and were blowing it out of proportion. For four years, it was TDP which shared power with BJP and Chandrababu Naidu has the history of aligning with BJP in 1999 and 2004.

Our leader YS Jagan Mohan Reddy has always fought a lonely battle and scored a thumping victory. After the death of YSR our Party has fought 46 elections and won all of them while TDP was nowhere in the race, she said.