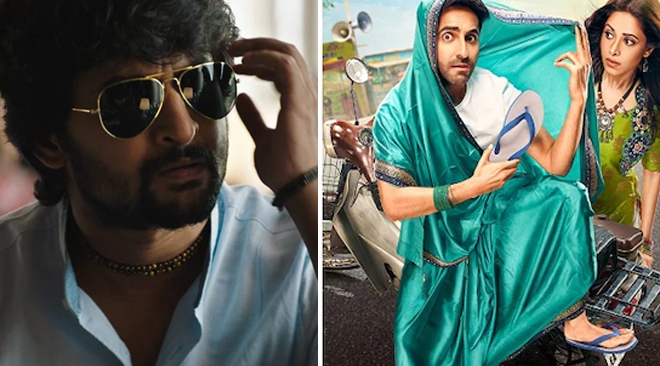 Nani’s Gangleader opened to decent crowds at theatres on 13th September in North America, Andhra Pradesh, Telangana, Karnataka and other areas in India. Movie collected a share of Rs. 7 crores, Worldwide for a gross estimated Rs. 9.5 crores.
Movie opened to a low buzz than Jersey, Nani’s previous movie. Movie has mixed talk even with Manam fame, Vikram Kumar as the director. It did not open well in US market too, when Nani and Vikram Kumar are strong.
Ayushmann Khurrana’s Dream Girl opened to a huge buzz and collected Rs.10.35 crores Nett gross on first day. Movie received decent to positive reviews and this is highest opening for any Ayushmann’s film.
It collected better in UP and North Delhi, Haryana areas. With the comedy being liked by many, movie could emerge as another winner for the actor, who is looking to have hit a gold peak in his career.
Chhichhore continued to find good crowds at the theatres even on 8th day. Partial Holiday in few areas for Ganesh Visarjan also helped the movie. It collected Rs. 5.25 crores Nett and total collection stands at Rs. 72.50 crores Nett, till date. It could hit Rs. 100 crores Nett, making it a big hit for Sushanth Singh Rajput, Shraddha Kapoor and Nitish Tiwari, the director.
Pahilwan opened to a rousing reception in Karnataka and movie gross is said to be almost 32 crores in two days. Sudeep has a good pull in other South Indian states as well, which helped the film open so big. But can it continue the momentum? We have to wait and see.
Prabhas’s Saaho run is over in South Indian markets and Overseas. In North markets, Hindi version added another Rs. 1.76 crores Nett to the total. The movie collected Rs. 140.25 crores Nett (Hindi version only), till now.
Section 375 collections are not that great on first day but the word of mouth is strong for the film. Looking at its limited appeal, it could manage to emerge sleeper hit at Metro cities in coming days.