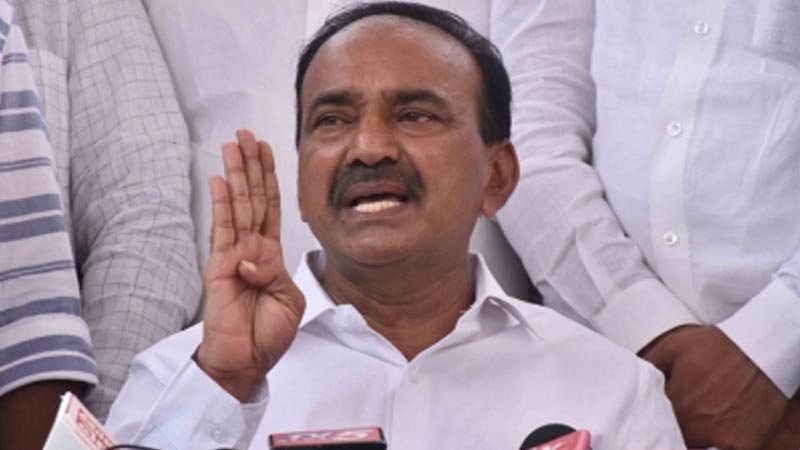 With former minister Eatala Rajender resigning from the Telangana Legislative Assembly, the state is set to witness another by-election in which the ruling TRS and the opposition BJP will once again face each other.

Rajender, who will be joining the Bharatiya Janata Party next week, has given the saffron camp another chance to project itself as the real alternative to the Telangana Rashtra Samithi in the run-up to the 2023 Assembly polls.

The Huzurabad constituency, which Rajender had been representing since 2009, is expected to see a tough fight. The BJP will be upbeat about its chances as Rajender has never lost an election from the seat, where he enjoys a good support base.

The TRS, on the other hand, will go all out to retain the seat in the politically significant Karimnagar district. This constituency has been the party’s stronghold since 2004.

In 2004, V. Lakshmikantha Rao was elected from Huzurabad on a TRS ticket. He retained the seat in the by-election in 2008.

Rajender, who was first elected from the Kamalapur constituency in 2004 and retained it in the bypoll, was shifted to Huzurabad in 2009. Since then he had been winning the seat for TRS.

One of the founding members of TRS, Rajender maintained his grip on the constituency. In 2009, he defeated his nearest rival V. Krishna Mohan Rao of the Congress by 15,035 votes. In the 2010 bypoll, Rajender increased his victory margin to nearly 80,000 and this time his nearest rival was M. Damodar Reddy of the Telugu Desam Party (TDP).

In the 2014 elections held just before the formation of Telangana state, Rajender retained Huzurabad with a majority of 57,037 votes. K. Sudershan Reddy of the Congress finished as a runner-up.

Rajender continued his winning streak from Huzurabad in 2018, defeating his nearest rival Kaushik Reddy of the Congress by 47,803 votes.

The BJP hardly had any presence in Huzurabad in the elections held in the past. In 2018, its candidate P. Raghu polled only 1,683 votes, which was less than NOTA votes (2,867).

However, with Rajender joining its ranks, BJP leaders are confident of wresting the seat from the TRS.

They believe that the saffron party will repeat its Dubbak performance in Huzurabad. In the by-election to the Dubbak Assembly constituency held in November last year, the BJP had pulled off a sensational victory to stun the TRS.

“Even in Dubbak, we hardly had any presence but we put in a lot of hard work to emerge victorious. We are confident that we will repeat the performance in Huzurabad,” a BJP leader said.

It was following the Dubbak victory that the BJP started projecting itself as the only alternative to TRS. The party’s central leadership too started focusing on Telangana.

A month later, the saffron party came out with an impressive performance in the elections to the Greater Hyderabad Municipal Corporation (GHMC). In the 150-member municipal body, the BJP increased its tally to 48 from just four seats in 2016.

It not only emerged as the main opposition in GHMC, but also deprived the TRS of a clear majority.

Graduate constituencies of the Legislative Council

Following these victories, the BJP has intensified its efforts towards the goal of capturing power in the 2023 Assembly elections. However, the outcome of the elections to two graduate constituencies of the Legislative Council in March and the recent by-election in Nagarjuna Sagar came as a disappointment for the party.

The BJP could not retain a Legislative Council seat and finished a poor fourth in the other. In Nagarjuna Sagar, where the main contest was between the TRS and the Congress, BJP candidate Ravi Kumar Naik polled only 4 per cent votes and had to forfeit his deposit.

Just as the BJP was looking for some course correction to strengthen the organisation ahead of the 2023 polls, the Rajender episode gave it another opportunity to prove a point.

When Chief Minister K. Chandrasekhar Rao dropped Rajender from the cabinet last month following allegations of encroaching the lands of farmers, the buzz in the political circles was that he will quit the TRS to float a new party or join hands with the leaders of smaller parties.

Rajender ended his nearly two-decade old association with the TRS and mounted a scathing attack on Chandrasekhar Rao.

Several followers of the former minister will also be joining the BJP with him. Political analysts say this will lift the morale of the saffron camp.

However, fresh from its victories in the Legislative Council elections, Nagarjuna Sagar bypoll and clean sweep in the elections to eight urban local bodies, the TRS is likely to go all out to defeat Rajender on his home turf and thus deal a blow to the BJP’s renewed attempts to emerge as the viable alternative in the southern state.