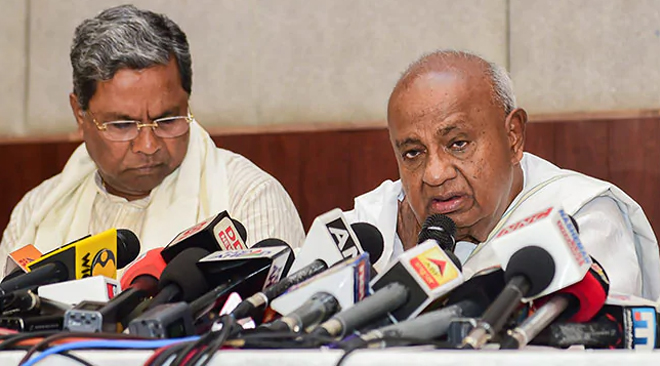 Barely dares after he slammed the Congress Party and blamed former chief minister Siddaramaiah for the fall of the Kumaraswamy Government, former PM and Janata Dal Secular chief HD Devegowda has indicated that he was game for an electoral alliance with the Congress. He asked Congress Party Chief Sonia Gandhi to extend a friendly hand in view of the bypolls to 17 seats in the state.

Interestingly on Thursday, Devegowda slammed Congress Party and said it should not underestimate the strength of the party. He said he would not tolerate criticism of the JDS and would teach a fitting lesson to the Congress Party. But, by Friday, Devegowda changed tack and said both the parties should come together to fight the BJP.

He said both should work in tandem and defeat the BJP. Sources say he is worried that if fought separately, the JDS would lose the three of the 17 seats it has now. Hence, Devegowda is now talking about an alliance with the Congress.