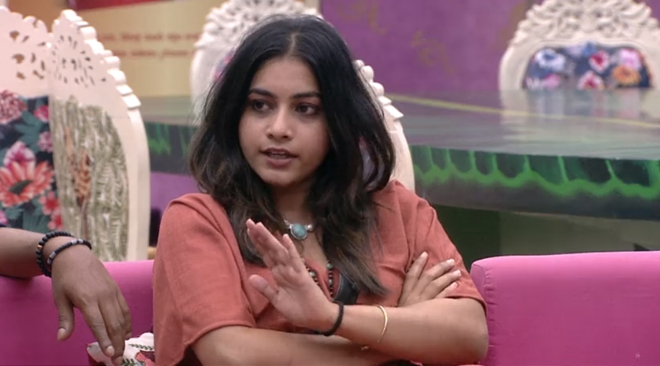 Punarnavi Bhoopalam made good amounts of fans by being the smart, lovely and pleasant face in the show, Bigg Boss Telugu. Himaja, Shiva jyothi, Srimukhi, Vithika have been either too loud or too manipulative but Punnu, as fans call her, had good name all along.
Even though she did show signs of arrogance, she did not loose fans support. May be because of her looks, or because of her romantic track with Rahul Sipligunj, she was able to sustain interest of public eye on her.
This week’s task made her look too arrogant and too selfish to admit to her loss. She made a scene out of the task, tried to blame Bigg Boss show runners for the task. Well, she can protest peacefully, audience would have supported her but the way she created a scene, made her look, violent.
Now, people at least on social media are against her and are asking for her to be eliminated when Shilpa Chakraborthy seemed obvious choice. Also, Srimukhi is gaining a name of being too manipulative and cunning, these days.