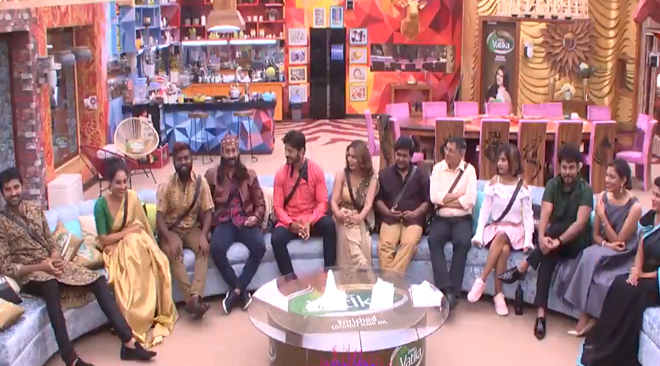 Though the weekday episodes of Bigg Boss are a little annoying, the audience will never miss the weekend episodes because of Nani. Every weekend, Nani points out the mistakes the contestants did for the whole week.

Nandini’s hug to Tanish:
In the previous episode, Nani first showed the video of what happened on Friday. In that, during the midnight, Nandini and Tanish got cozy with each other. Nandini said everyone’s asleep and asked if he wants a hug, as Tanish said yes, she got up from her bed and gave a hug to him which is captured in the night-vision cameras. While interacting with them, Nani made fun of Tanish that “Asking you not to pamper Sunaina doesn’t mean you should do tampering with others.” Also, as a punishment for not using the mic properly, Nani said that Tanish should put a plaster on his mouth and not talk for one day.

Argument with Babu Gogineni:
Nani also corrected Babu Gogineni and said that he doesn’t have the right to decide whom to kick out of the house and audience are the ones who choose their leader. He argued that Bobu should not just give out statements and who is he to ask why Rajamouli went to a temple being an atheist.

Nani about Geetha:
Nani said that before marriage, Nandu asked Nani if it is really fine to get married before establishing himself as a good hero in the industry to which Nani said he should not postpone the marriage if Nandu really wants a life with her. Now, he said that Nandu made a right choice and praised Geetha Madhuri for handling the fight between Babu and Kaushal well.

For the past two weeks, there are so many issues going on in the Bigg Boss house. Apparently, Babu Gogineni who is also a contestant in the Bigg Boss house made some controversial comments on renowned director Rajamouli. In the yesterday episode, host Nani has a heated argument with Babu and tried to set him right. Defending himself, Babu Gogineni questioned being an atheist himself, how can Rajamouli go to a temple to which Nani responded “My grandmother is a Christian. I used to go to church with her. How can you decide that it is a mistake for a Hindu to go to a church.” which left Babu speechless.

Nani also scolded Babu saying that he can only train how to be a leader and audience are the ones who choose their leader. He further added it is not Babu Gogineni’s task to decide whom to stay in the house and whom to eliminate because the viewers are already on it. However, Nani handled it well and cut off the conversation. In today’s episode, Nani is going to send one of the evicted contestants into the house again. There are so many speculations about who is going to enter the house as a wild card entry.