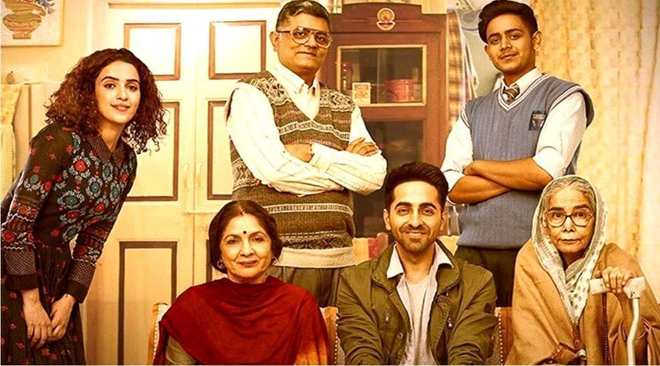 Amit Sharma’s Badhaai Ho became a massive hit last year. Neena Gupta, Ayushmann Khurrana, Gajraj Rao, Surekha Sikri, Sanya Malhotra starred in the film and they made the premise of a woman becoming pregnant in her mid-40’s a more grounded and realistic with their performances.
The movie as expected got nomination for Best Story in Filmfare Awards. But the nominations mentioned three names – Jyothi Kapoor, Shantanu Srivastava, Akshat Ghildial. After few days, Jyothi Kapoor’s name has been removed from the nominations. She went on to the media to talk about the issue and claimed that she worked on the project and she should get the due nomination.
Writers Shantanu Srivasthava and Akshat withdrew their names from the nominations. Talking about this to Pinkvilla, Shantanu said, “I am devastated by the claims of Jyothi Kapoor. We neither met her nor worked with her. She is employed by Junglee Pictures, the producers, for writing a script of her own for an idea they gave. We came up with our own script. You can check our scripts and Akshat is devastated about it as he wrote the story, screenplay and dialogues with his own idea.”
He continued, “We won’t sit silent and wanted to get to the end of it. We won’t be bullied to accept something we haven’t committed and the person, Jyothi is speaking lies. So, we came out and withdrew our nominations!” Amit Sharma, the director and Producers supported the writers for standing up against Jyothi Kapoor! No one has gone to such extent to withdraw nominations from prestigious awards like Filmfare before, this is really huge.