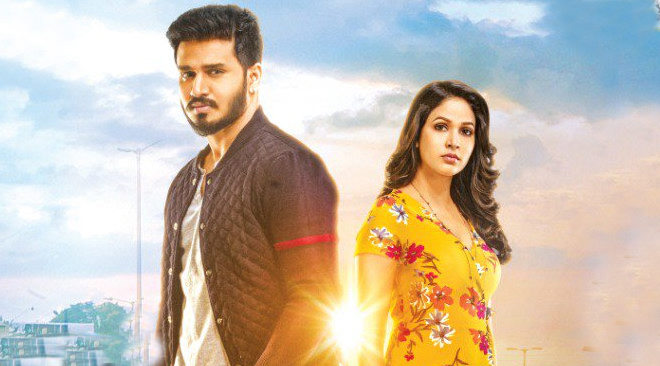 Cast: Nikhil Siddhartha, Lavanya Tirupathi, Nagineedu, Vennela Kishore, Satya, Posani Krishna Murali
Crew:
Music: Sam C.S
Editing: Navin Nooli
Cinematography: Surya
Writer-Director: T. Santhosh
Producer: Rajkumar Akella, Kavya Venugopal
CBFC: U/A
Arjun Suravaram was 2 years in production and it was further delayed in March, when the team thought they cannot fight with new films and Avengers:EndGame, during the time. The movie after being in cans for good 8 months, finally released on 29th November, 2019.  Nikhil Siddhartha and Lavanya Tripati acted as leads in the film in the direction of T. Santhosh. Can the film get audiences approval even though it took one lifetime to reach to the theatres? Let’s discuss
The average moviegoer wants a film to entertain and also show them some reality on-screen with a problem that they can connect. Here, T. Santhosh took a problem like identity theft through fake certificates which has become a huge issue in today’s world. Unemployment has grown by leaps and bounds due to some crooks, who are trying to get jobs through malicious ways. The story tries to follow an investigative journalist who unveils the big scandal.
Arjun Lenin Suravaram (Nikhil) is a highly qualified and daring journalist, whose father is also a Journalist but with old world values. Arjun Suravaram too thinks like his father but his techniques are highly different from that of his father. He meets Kavya (Lavanya Tripati) through a chance encounter during a sting operation. He tells her that he belongs to BBC but actually he works in a TV channel that is run by her family.
His friend (Vennela Kishore), a struggling Lawyer doesn’t try to work as much as Arjun and this irritates Subbarao (Posani), his constable father. Finally, Arjun gets an interview in BBC and he is accepted too. Suddenly, police arrest him in fake certificates scam and from there on he starts his own investigation to prove his innocence and win his identity back. How he did it? Watch it on screen.
Nikhil did not really shine in this character as much as he did in his early films. He tried to develop a body language that doesn’t suit him for this role and that made him look a little rigid most of the time. He could have done much better had he not tried to follow the original actor. Lavanya Tripati was just her usual self. Rest of the actors too don’t really score high even though director tried to give them all some important moments. Vennela Kishore leaves slight impact.
Editing by Navin Nooli and Cinematography by Surya could have been better for the kind of subject Santhosh is narrating. At times, visuals don’t compliment the director’s ideas and even the tone seems too artificial at times. Both of them did better job than average Joe but they could have pulled off even better job than this. Music by Sam CS is loud and ineffective. But his background score is good enough. Santhosh seems to have made changes to fit the bill of commercial audiences taste in Telugu but the movie loses grip at times as it doesn’t connect us with the problem as much as it should.
Also, script lacks in innovation at times. It tries to create a good situation that interests us and at the same time, chooses easy way out at those important moments to give shock value. This makes the film a pure popcorn flick but audiences will be left wondering why the director chose to complicate things when simple and effective narration would have helped the screenplay better. On the whole, movie has some good sequences but they are in short supply as the pacing goes haywire. Try it out on a lazy weekend if you like actors.
Rating: 2/5