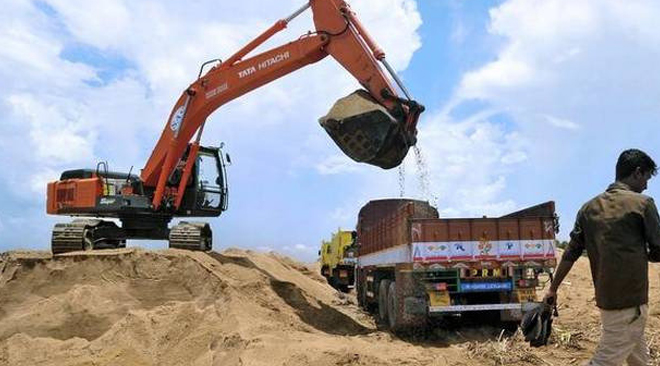 Sand is the hottest topic in Andhra Pradesh these days and the Opposition is pulling all stops to ensure that this remains a hot topic. It is marshaling the media at its command and is trying to politicize this issue.The fact is YS Jagan’s moves were well-intentioned. He wanted to put an end to the sand mafia, which wreaked havoc with the active connivance of the powers that be during Chandrababu regime. The illegal miners, sand traders, officials and politicians of the yellow variety colluded with one another to loot the people. So, Jagan wanted to put in a new policy where the middlemen are eliminated through online policy. It was a welcome move and everyone appreciated it. But, continuous floods, swollen rivers, and submerged sand reaches made it very difficult to mine the sand and supply to the needy. There was no sand mining for the last two months and this led to a halt to sand transport. For the TDP, which has always backed the sand mafia, this was god-sent. They used this to the hilt and began a massive misinformation campaign against the ruling YSRCP.

The Government, which made available at least 5000 tonnes of sand when the new online sand procurement policy was introduced, has later raised it to 45000 tonnes. Still, due to the high demand for sand, there was an acute scarcity and the people suffered. The administration is now looking for alternative reaches to address the scarcity and hopes to solve the issue by November-end.In fact, during the TDP regime, leaders of the ruling party have turned into a sand mafia and minted money like there’s no tomorrow. Sand mining and supply were the most lucrative money-spinner for them and many TDP leaders became full-time sand miners. They looted the common man in the name of online orders and free sand. The sand was sold at Rs 20000 per tonne despite the claims that sand was being supplied for free.

AP has 267 sand reaches from where the sand is mined. Of these 207 reaches (roughly 80 per cent) are marooned. Sand can now be quarried from only 60 reaches. For the past 70 days, Krishna river is swollen and for the past 40 days, the Godavari is in spate. This is unprecedented. Due to swollen rivers and rivulets, an estimated 4200 tmc of water is flowing waste into the Bay of Bengal. This unprecedented situation has led to the never-before sand scarcity. The opportunistic Opposition is trying to whip up passions and garner political mileage out of this crisis.

No problem for coming 5 years

There is a flip side to this problem. Due to the floods,  there are additional sand deposits to a tune of 10 crore tonnes on the river plains. This is much more than the average annual sand usage which stands at 2 crore tonnes. This means, once the floods recede, the state will have enough sand to address the requirements of the coming five years.  This means there would be no sand shortage for the coming five years. The permanent measures being put in place by the YSRCP government would ensure that there would be no problem in the future. While this is definitely good news for the people at large, it is definitely bad news for the sand mafia and the TDP, which is in cahoots with it.