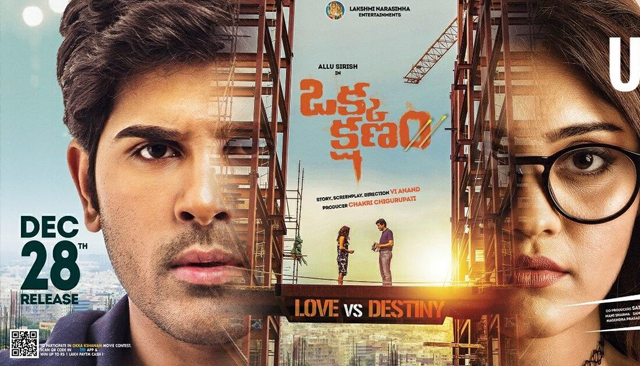 Allu Sirish has decided to make a comeback with a science fiction entertainer after a family movie like Srirasthu Subhamasthu. His attempt at giving an wholesome entertainer with a strong script is laudable. But did the concept of destiny vs love, worked magic for him? That’s the question for which we need to find answers within the film. With a bit risky concept of science explaining the coincidence of the universe with a theory that doesn’t really stand sound, the film did give an engagement twist to proceedings. Let’s find out more about it ..

In a freak coincidence, Jeeva (Allu Sirish) and Jyotshna (Surbhi) find out that Srinivas (Avasarala Srinivas) and Swathi (Seerat Kapoor) have a parallel life to them. Like Jeeva, Srinivas also meets his love on the Christmas night in the basement of a mall. Jeeva gets to know because of the noisy behaviour of Jyotshna and once, he finds out that there are chances that both of their stories could be going parallel and Sreenivas and Swathi, are their past, he tries to peel out all the details of what happened between them and why they are unhappy.

One day, Sreenivas is arrested for killing Swathi and Jeeva ends up heartbroken as Jyotshna pushes him away in fear of being killed by him. Unable to convince himself and Jyotshna, Jeeva starts drinking alcohol like Sreenivas. Will Jeeva be able to save Jyotshna from himself? Or is there a twist in the tale? Why did Sreenivas kill Swathi? Watch the movie for answers ..

Allu Sirish tries hard to emote but somehow his skills and features are not allowing him to do so. We can see that, he is trying something but we do need some interpreter, who can help us crack what he wanted to say through expressions. But when he needs to just deliver a dialogue, he does it well enough. The actor needs to work on his expressions further without a doubt.

Surbhi and Seerat Kapoor are as plastic as it can get. Even though the strong scenes ask them to deliver more, they needed dialogues to express what they feel rather than expressions. In any case, they are there to give audience a “visual treat” and let the story move around them.

Avasarala Srinivas proves once again that he has a great ease and even with a straight face, he is able to deliver the lines with right emotion and body language. In few scenes, he does look like he doesn’t have enough energy but that is in sync with the character. Rohini scores as the protagonists mother.

Dasari Arun Kumar looks good but his character is there to just extend the climax rather than give it a wholesome meaning. Satya, Praveen and others are good in their respective roles.

Shyam K Naidu, uses lots of lights to give a mystic touch to the proceedings. His concepts in the scenes and songs have some depth but the consistency in the film suffers due to his heavy saturation color choices. Had he slightly controlled himself in few sequences, especially in pre-climax episodes, it could have been better consistent looking film.  Mani Sharma is an asset to this film.

He lifts many sequences with his back ground score but we feel like he used Yuvan Shankar Raja themes from 5 to 6 years old films in the first half. May be a choice of the director? More than his songs, Back Ground score is the best aspect of his work here.

Writer and director, VI Anand tried to use, Parallel Lives, theory but he failed to really use the premise well. His love story needed to be strong than entertaining for the whole premise to work well. He tries to explain the point with side characters and then with scenes as well. Somehow, such exposition kills the excitement of hero finding it out by connecting the dots all by himself, like him figuring out the real murderer of a lead character.

We have very little to go back to as the film suffers from syndrome of over explaining itself and repeating for the sake of common audience, thinking they wouldn’t be able to catch up with the story flow.

Somehow, this hampers the progress of the movie and extends itself with long drawn sequences that could have been shortened for audience to catch up easily. Also, in trying to delay the predictable culmination he relies overly on a newly introduced character that doesn’t really make us feel for the characters in any sense. Had he planted some hints through the run time, before revealing such an important character, the screenplay and purpose of the film would have served better. He somehow managed to give a decent enough twists to the story, even though they look like director’s indulgences for moving the story forward rather than organic progress.

Premise of the movie.

Over reliance on explaining and re-explaining scenes.

Drag in the screenplay even though when ending is predictable.

VI Anand proved himself that he can blend comedy seamlessly into a narrative and give serious twist to the proceedings whenever he wants to, in his previous films. Here, he takes an interesting concept and tries to spin a routine story around it and perform the magic with screenplay. He succeeds in right few sequences but not entire film. Overall, he manages to make a film that doesn’t completely nosedive into the abyss of predictability and sustains some amount of interest till the end. One time watchable, during the free holiday weekend.