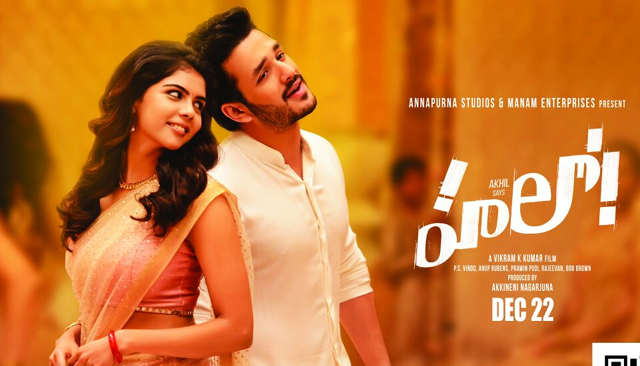 Akkineni Akhil started off with a bad movie as his first film and he needed to deliver a good film that will show audience what he is capable off and also a box office hit. His father, Nagarjuna Akkineni took onus upon himself to guide his son and brought in Vikram Kumar, who made Manam with him and his father, Akkineni Nageswara Rao. So, this movie had a lot riding on it for the makers and it is interesting to see after, Manam and 24, what will Vikram come up with.

Hello, released today and let’s dive in to the details of what the movie is and how it all unfolded.

Seenu (Akhil Akkineni) is an orphan and a street kid. One day, he meets Junnu (Kalyani Priyadarshan) at a park. They are kids then and Junnu finds Seenu interesting and wants befriend him. She gives him 100 everyday and even goes to park in a drama costume to play with him. Seenu and Junnu get seperated as Junnu aka Priya’s parents shift to Delhi. Junnu writes a phone number and gives a 100 note to Seenu before leaving Hyderabad.

Someone grabs it from him and while chasing that other kid, Seenu is hit by a car driven by Sarojini (Ramya Krishnan). Her husband Prakash (Jagapathi Babu) meets the boy and likes his innocence and good nature. They adopt the kid and rename him as Avinash. So, can Priya identify Avinash as Seenu, if she meets him ever? What will bring them together? If they ever meet, will they still be in love with each other? Watch the movie for answers.

Akkineni Akhil is well trained in fights and dances, he proved this in his first movie itself. But his acting did not get such positive feedback. Here he corrects himself. He tries to behave on screen rather than try to act in a filmy mode. His body language in this film is good and screen presence is attractive too. His telugu diction and expressions need to improve.  But for a second film hero and after coming from such a downer, we should appreciate the efforts he put in for this movie.

Kalyani Priyadarshan looks good on screen but she her performance needed some more polish. For a debutante, it is a spirited performance and she shows good potential for future films. Hope she improves and becomes a good actress Telugu Cinema deserves. Ramya Krishnan and Jagapathi Babu win us with their matured and likeable performance. Satya Krishna and Anish Kuruvilla with Krishnudu, Posani Krishna Murali, Ajay are good too.

A special mention to both the child artists who established the story as Seenu and Junnu, very well. Mikhael Gandhi is particularly good and the girl too is really cute.

P. S.Vinod is a magician with camera and he does the same in this Hello too. He never let’s us miss out on details and even the simplest set pieces that are way in the back ground are noticeable in his frame. He gives this love story great support and poetic frames.

Anup Rubens gives good music and his songs are shot well on screen too. But when it comes to Back Ground score he underwhelms in the action sequences as they feel like a sound track running not completely in sync with scene. But for emotional scenes his score is very good.

Editor Prawin Pudi does a good job in keeping the runtime short and crisp but few portions seem dragged on. The drag was essential as the director had few important things planned in his screenplay. So, the drag seems necessary for the narrative.

Writer – Director, Vikram Kumar when it comes to creating a universe, where his set logic coincides with the world’s common view, is a genius. He writes with great passion for details and gives them the necessary time to be noticed by audiences and also make it work on screen. We feel like being part of his imagination and be his characters, the way he defines them. Even the minute details have much importance in the way he sets them up for a deserved pay off later in the screenplay. Even though it seems unrealistic he has his way of convincing you with art and aesthetics.

The way he clubs in the re-launch of a young hero and beautiful story that he wants to tell is highly clever. The magic lies in his screenplay and we forget that we are just watching a movie. But he does carried away into those aesthetics and adding significance to few non-significant things and there, he could loose some people. In this movie, in the second hour there is some superficiality in the story aa he gets carried away but then he returns to his main plot and ends it on a good high.

Narrative skill of the director

Aesthetics and detailing in the screenplay

A bit drag in the second hour

Few scenes that don’t seem completely fitting into the narrative.

Drop in pace in the second hour compared to first hour.

Vikram Kumar as a knack in presenting the aesthetics of his plot with good detailing on screen. He doesn’t shy away from delivering a technically sound film and in doing so, he doesn’t damage his story. He blends it all well. This is not a story that is completely new but his presentation works in favour of it. Akhil in his re-launch doesn’t completely win over you, but succeeds in wiping out all the negativity from his debut film. Majorly it connects with multiplex crowds more than massy ones. But there is enough for film lovers to dive into. On the whole, this a good popcorn fun film for your weekend.