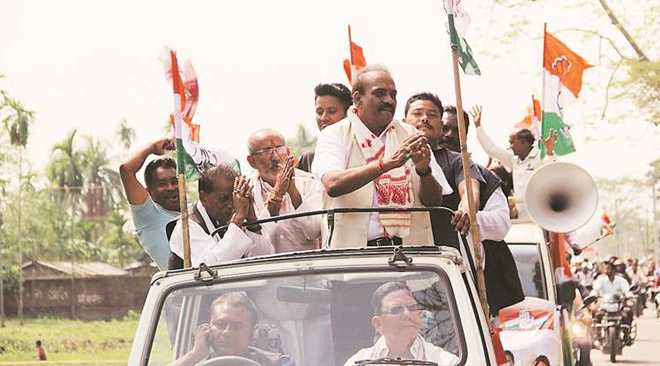 Do you know that a Telugu is a contesting for MP seat in Assam? It may come as a shock for all of us, but MGVK Bhanu, a retired IAS officer, is contesting from Assamese heartland of Tejpur for the Lok Sabha on a Congress ticket.

Bhanu retired as the additional chief secretary of the Assam Government and officiated as the chairperson of the Tea Board. During Congress chief minister Tarun Gogoi’s time, he was advisor to the Chief Minister.

Bhanu is the son-in-law of former union minister and senior Congressman Pendekanti Venkata Subbaiah and is a 1986-batch Assam cadre IAS. But, he is equally controversial for many of decisions and was seen as an outside influence on the Congress government.

He was so powerful that many ministers and MLAs had to take his permission to meet the chief minister. Though his importance has come down after the BJP government came to power, Bhanu still has lot of connections in the administration. Will he be able to beat the BJP? Let’s wait and see!