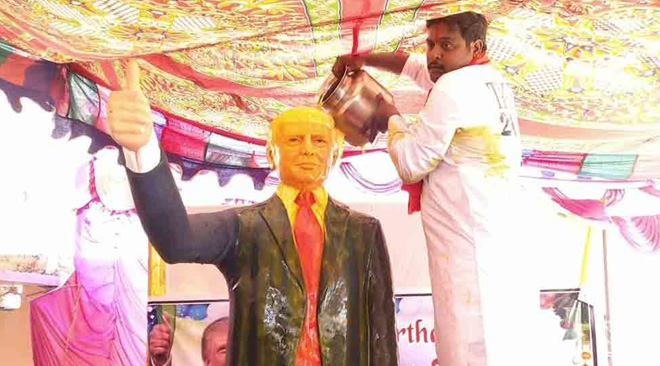 Donald Trump may be hated by many in the US itself. But, he has an Indian admirer. This admirer not just worships him, he also performs harathi and abhishekam to Donald Trump statue in his village. What moe, is also lights lamps near the statue every day.

A Telugu youth has erected a six feet tall statue of US president Donald Trump in is village. This bizarre incident occurred in Konne village of Janagaon mandal. Bussa Krishna, a 32 year old youth, is a great admirer of the strong leadership and the bold attitude of Donald trump and erected the statue.

What is interesting is that Krishna has spent Rs 13 lakh from his pocket to get the idol sculpted and installed. He also organised a massive feast for the villagers on the occasion of the installation of the statue.