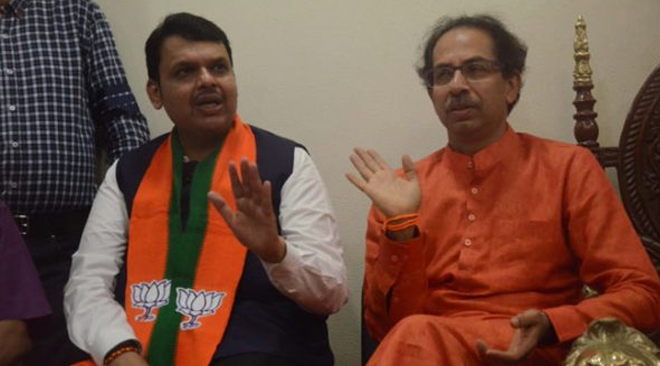 Maharashtra witnessed another spell of hectic political activity on Friday as the tenure of the current legislative assembly expires on November 9.

A new face in the form of Hindutva leader Sambhaji Bhide ”Guruji” has jumped into the political cauldron and held discussions with Chief Minister Devendra Fadnavis at his official residence ”Varsha” at Malabar Hill. Bhide declined to speak to the media on what transpired between them.

Incidentally, the 85-year old went to ”Matoshree” in Bandra east, the home of Shiv Sena President Uddhav Thackeray late on Thursday night, but was politely declined a meeting.

A senior party leader later questioned Bhide”s “credentials and locus standi” in the matter of government formation that has become an issue between BJP and Sena.

Sena MP Sanjay Raut said that the party doesn”t need any intermediaries for discussions and the BJP leadership must directly approach the Sena if they have anything to convey. He reiterated the party”s stand on the post of CM and equitable power-sharing as per the formula agreed before the last Lok Sabha elections.

After meeting the Rashtriya Swayamsevak Sangh top brass including its chief Mohan Bhagwat on Thursday, Union Minister Nitin Gadkari arrived in Mumbai where he is likely to hold discussions with the state party leaders on the political deadlock.

The Congress and NCP are holding separate meetings of their legislators to brief them on the developments and ensure nobody becomes a victim of ”political poaching” in the coming days.

Both the warring partners – BJP and Sena claim that their government will take office before the deadline of November 9, though neither has staked claim to form the government nor are engaged in formal talks.

The Congress-NCP have already announced that they are ready to sit in the Opposition and urged the BJP-Sena to take steps to form the government and prevent a Constitutional crisis in the state as the prospect of President”s Rule loomed ahead after Saturday.

Even the Vanchit Bahujan Aghadi leader Prakash Ambedkar has urged the Governor to explore the possibility of forming a stable government in the state and end the current stalemate.

Ranked amongst the most politically stable states in the country, in its entire 59-year history, Maharashtra has witnessed spells of President”s Rule only twice – for 112 days in 1980 (Feb-June) and later for 33 days in September-October 2014.